Known as the Hoosier State, Indiana's Midwest location has always meant that it is never far from the heart of American life. In fact, its official state motto is the 'Crossroads of America'. In the days of fur trappers and traders, everyone passed through here on their way from east to west, and north to south. Today, Indiana has the modern equivalent of those olden day pioneer trails in the form of a network of interstate highways that help to keep American businesses on the move.

Indiana is a state where you will find lots of farms and small Midwestern towns, with their tidy grid pattern of streets serving up a multitude of coffee shops and stores. Places like Nappanee spring to mind, being liberally sprinkled with historic buildings and moving at a distinctly slower pace of life.

Those who hail from Indiana are rather mysteriously called 'Hoosiers'. The origins of the nickname are somewhat lost in the mists of time. Theories range from this being the name given to brawling residents of Indiana to a certain Mr. Hoosier, who hired men from Indiana to work on his canal-building projects. There's even mention of a lively preacher called Harry Hoosier.

The town of Speedway, in Indiana's county of Marion, is famed for its namesake speedway. This town was designed with cars very much in mind. In the 1920s, homes were even built with garages. A racetrack was also constructed, known famously as The Indianapolis Motor Speedway. Since 1909, racers have experienced the thrill of a track that has remained relatively unchanged over the years. Today, it is the venue for the Indianapolis 500 and NASCAR's Brickyard 400 races. 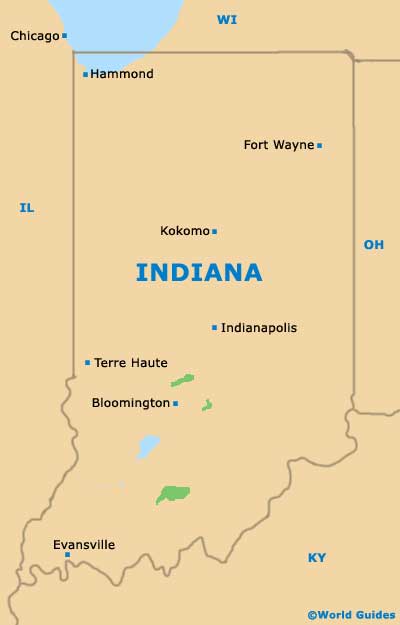