The state of Colorado lies at the very heart of the American Southwest. It is famous for being home to the snowcapped Rocky Mountains, which split the state north to south, as well as for its verdant forests, dramatic canyons and high plateaus. Most of all though, it is usually known as the playground of the skiing fraternity, who come here to play in the powder and enjoy life in the sun at high altitude.

Colorado was named after the river that runs through the state, with intrepid Spanish explorers being the first people to venture into this untamed region. They came in search of the legendary 'Seven Cities of Cibola', where the streets were, by all accounts, paved with gold. In 1858, the inhabitants of Colorado finally discovered gold here. The city of Denver grew up around the mining camps, which were soon filled with thousands of immigrants. Colorado was admitted into the Union in 1876, the centennial year of the US Declaration of Independence, hence its nickname as the Centennial State.

The skiing credentials of Colorado date back to 1912, when a ski jumping contest was first held in Hot Sulphur Springs. By the 1960s, Colorado had grown into an international winter sports destination.

Colorado featured in the popular folk song recorded by John Denver in 1972. 'Rocky Mountain High' was inspired by the singer's move to Aspen. In 2007, it was adopted as one of the state's official songs. 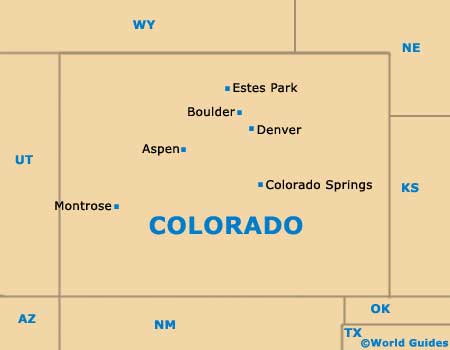