Alabama is located in the south of the USA, being surrounded by the states of Tennessee, Georgia, Mississippi and Florida. Its landscape ranges from the Appalachian Mountains in the north to the subtropical south at the Gulf of Mexico.

Much of Alabama is covered by forests and, indeed, there are numerous state and national parks within its boundaries, meaning that there is no shortage of opportunities for locals and visitors to enjoy the great outdoors. Whilst Birmingham is the largest city in the state, Mobile counts as the oldest. It was founded as far back as 1702 by French colonists.

Alabama joined the Union in 1819. From 1927, it gained the nickname of the Yellowhammer State, named after the state bird. Its fascinating history has bequeathed Alabama with a rich heritage of fine antebellum architecture, 19th-century Civil War battlefields and American Civil Rights history. Most notably, it is here that Rosa Parks sparked off the struggle against segregation when, in 1955, she refused to give up her seat to a white man whilst she was travelling on a bus in the capital city of Montgomery.

Notable residents from Alabama's history include the writer Harper Lee, of 'To Kill a Mockingbird' fame, the musician Nat 'King' Cole, and the athlete Jesse Owens, who famously set track records at the 1936 Olympic Games in Berlin. 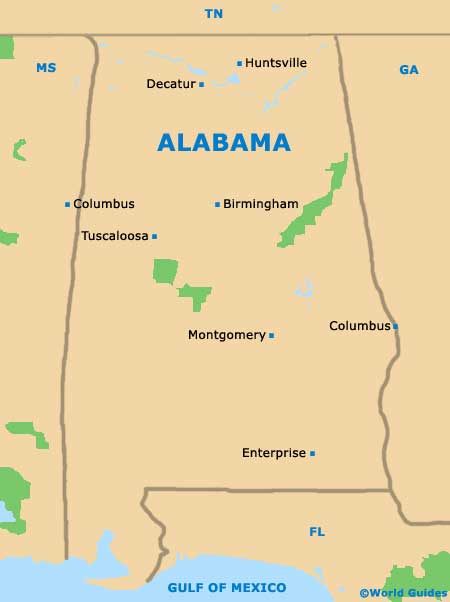