You don't often hear people say that they are going to Manitoba for their holidays. It is easy to overlook this lesser-known Canadian province in favor of better-known cities and regions. It would be a shame, though, to miss out on this quirky corridor of land, with its clear, sunny summer skies, its forests, lakes and rugged landscapes, and vast open spaces.

A huge area of Manitoba is covered by its 100,000 lakes, including Lake Manitoba and Lake Winnipeg. Almost half of the province is also covered by forests of spruce, pine and poplar. In the south, tall grass prairies spread their way over the landscape.

It is not just the landscape that sets Manitoba apart. The north of the province is well-known for its wildlife population. Here you stand a good chance of spotting wild moose, wolves and polar bears. Churchill, a town situated on the shore of Hudson Bay, is known as the 'Polar Bear Capital of the World'. Tourists can view the bears from special tundra buggies and it is possibly the only town to have a specially constructed 'polar bear jail'. You also stand a better-than-average chance of spotting a snake if you head to Narcisse. This tiny hamlet, squeezed in between Lake Winnipeg and Lake Manitoba, has the largest concentration of snakes in the world.

Manitoba has retained its bilingual status over the years, despite the fact that its French-speaking population is dwindling. That said, the French-speaking Le Cercle Molière, based in Winnipeg, is the oldest running theater in the whole of Canada. 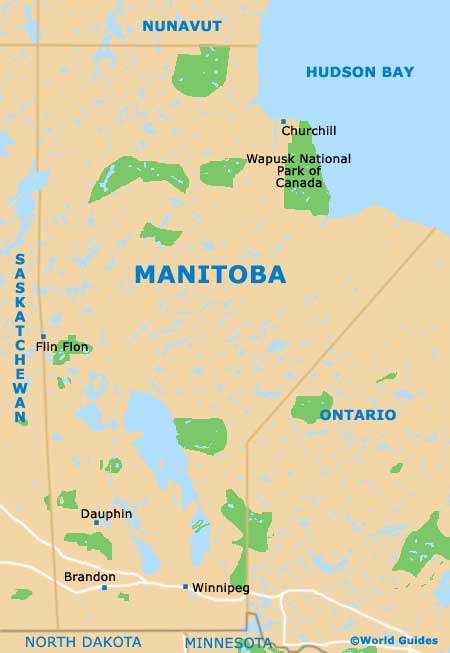