Located within the West Midlands and on the north-easterly side of England, Birmingham is an important city and is second-only to London in terms of overall size and population. In fact, Birmingham's population has now exceeded one million and continues to grow, as the city expands.

Birmingham is unquestionably a large and sprawling city, and those arriving by car will likely find that its endless series of ring roads and roundabouts can be quite confusing, particularly at times of heavy traffic. A series of busy motorways surround the city and include the M5, M6 and M42.

Those with a car should note that Birmingham is within easy driving distance of many popular cities and towns, such as Cheltenham (south-west), Coventry (south-east), Derby (north-east), Leicester (north-east), Nottingham (north-east), Redditch (south), Solihull (south-east), Stratford upon Avon (south), Worcester
(south-west), Walsall (north) and Wolverhampton (north-west). Regional maps are essential for day trippers and are available at most newsagents and book shops in central Birmingham, as well as at the Tourist Information Centre (TIC) in the City Arcade, and at the nearby National Exhibition Centre (NEC).

Central Birmingham is heavily pedestrianised and is centred around the city's magnificent Council House. Shops are evenly distributed on the City Plaza, New Street and within the Pavilions and the Pallasades shopping centres, as well as around the relatively new Bull Ring area. 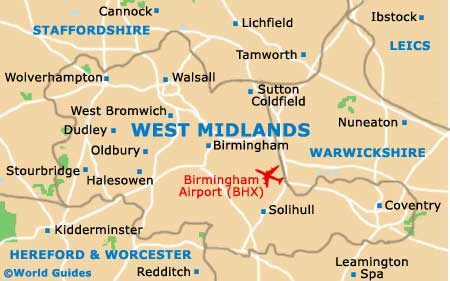 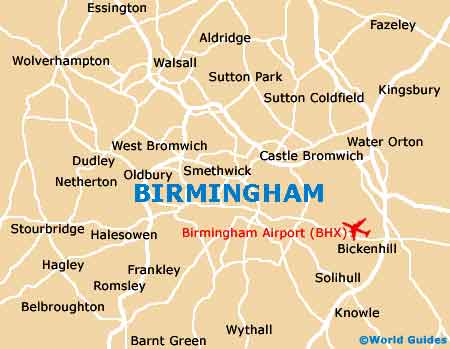