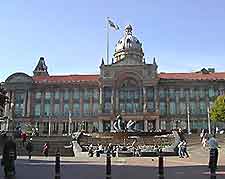 Birmingham has a number of lively festivals and events which take place throughout the year, in and around central Birmingham. Residents like to party and the area's extensive calendar of festivals and events includes lively street fairs, carnivals, parades and numerous sporting events. Local newspapers and leading magazines regularly publish the latest cultural events and Birmingham festivals, and also contain up-to-date listings of events nearby the city.

The city's helpful tourist information office is always a useful source for current events and festivals. Many of the these draw enormous crowds of both participants and spectators, and provide tourists with a wide range of things to see and do whilst staying in the exciting city of Birmingham.