Getting Around, Birmingham Travel, Transport and Car Rental 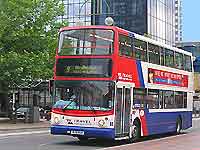 Birmingham city is situated nearby many other interesting towns, cities, tourist attractions and important landmarks, and visitors in Birmingham often travel outside of Birmingham, into the surrounding areas.

Renting a car is often the preferred method of travel for excursions from Birmingham and it is relatively easy to travel around the Birmingham area by car. There are a number of major roads and motorways situated on the outskirts of Birmingham, which provide fast routes when travelling both to and from Birmingham.

Birmingham is served by a number of airports, the closest and most convenient of which is Birmingham International Airport (BHX). London Airports, including London Heathrow Airport (LHR), London Gatwick Airport (LGW), London Stansted Airport (STN) and London City Airport (LCY) are also within easy travelling distance of Birmingham, by either train, coach or car.

The district of Birmingham is served by a number of major motorways and Birmingham is situated at the heart of the United Kingdom motorway network. Birmingham has direct links to the M1, M5, M6, M40 and M42 motorways.

Although the traffic in and out of Birmingham can be heavy during peak commuting hours (07:30 to 10:00 and 16:00 to 18:00), driving in central Birmingham is fairly simple. Located on the outskirts of Birmingham, Spaghetti Junction serves 18 routes and connects Birmingham to the M6 southbound, the M5, the A38 and many other roads. The Birmingham Spaghetti Junction, also known as the Gravelly Hill Interchange, was the first free-flow interchange not involving roundabouts or traffic lights in the United Kingdom and was constructed more than 30 years ago.

Several roads in Birmingham are one way only and part of the city centre is restricted to buses and taxis only. Many tourists staying in Birmingham choose to rent cars and these are the best method of transport when travelling outside of the city, to explore the surrounding countryside and nearby towns. There are plenty of parking garages and off-street parking areas available in Birmingham, although many areas are restricted to residents only and parking permits are required. There is also a large park-and-ride service, where you can park your car on the outskirts of Birmingham, in Star City and travel into the centre by bus. Regular buses travel into Birmingham city centre from the park and ride car park every 10 minutes throughout the day.

Birmingham is well pedestrianized and one of the best ways to travel around Birmingham is by foot. This is a popular way to see some of Birmingham's numerous tourist attractions, museums, art galleries and monuments. Finding your way around central Birmingham is very straightforward and many of the city's major sights and attractions are within easy walking distance of each other.

Tel: +44 (0)870 580 80 80
Birmingham is also at the centre of the national coach network, with direct links to around 500 different destinations. The main coach station in Birmingham is situated at Spencer House, in the central Dugbeth district of Birmingham. 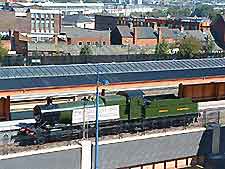 Birmingham's is served my three main line train stations that travel to a wide variety of destinations throughout the country. Birmingham New Street Train Station, Birmingham Snow Hill Train Station and Birmingham International Train Station are all within easy reach of central Birmingham. Frequent rail services travel between Birmingham and London and this journey takes around one and a half hours. Advance seat reservations can be booked if required.

Black taxi cabs in Birmingham are one of the most convenient and popular ways to travel around the Birmingham area. They can be easily caught from the taxi ranks outside of the Birmingham International Train station and in Birmingham city centre at the Arcadian Centre on Hurst Street, or hailed from the street. Also in quieter areas of Birmingham, taxis and minicabs can be ordered by telephone and there are a number of reputable taxi firms that your hotel can recommend. Additional taxi charges in Birmingham are often made for luggage, travel late at night, extra passengers and travel on public holidays.