Birmingham Weather, When to Go and Climate Information

Weather in Birmingham is best during the late-spring and summer months of May, June, July, August and September, when the climate is at its most appealing and the city enjoys plenty of fine sunny and warm days. However, English summers are famous for being changeable and although weeks of solid rain during July and August are unusual, they are certainly not unheard of. Neither are summer months with hardly a shower, causing droughts and even hose-pipe bans.

Spring is always a popular time to visit Birmingham and the weather is fairly mild during the months of March, April and May, although some days can be extremely wet and windy. Forecasts are not always accurate, and so it is best to leave your travel plans to the last minute if possible, when the current day's forecast is more likely to be reliable. 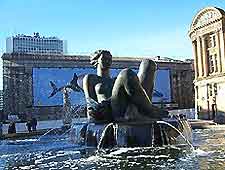 Winters in Birmingham can be long and damp, and there are fewer sunny days in November, December and January.

The climate is at its coldest during the winter months, with spells of heavy snow arriving as early as November and as late as April. Bringing a warm coast, gloves and a scarf is sensible, along with an umbrella. Overnight frosty weather in the winter is commonplace, while daytime temperatures average around 6°C / 43°F or 7°C / 45°F.

The following are the normal daily temperature ranges for Birmingham: