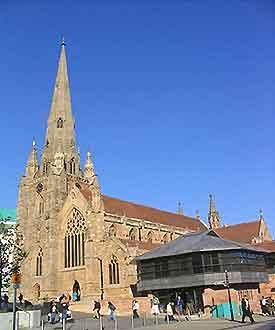 Birmingham has an enormous number of beautiful churches and cathedrals in and around the city centre and most are in exceptional condition.

Many of the churches in Birmingham often hold regular services and openly welcome all religions. 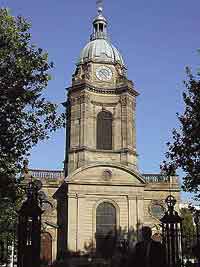 Address: Granville Street, Birmingham, B1 1SB, England
Tel: +44 (0)121 693 6300
St. Thomas's Church was destroyed in the second-world war and is now just historic ruins. Previously an imposing church that was built in the early-19th century, St. Thomas's Church remains as an important Birmingham memorial to all those who tragically lost their lives in this war.
Open hours: daily

Church of St. Alban the Martyr

Address: Conybere Street, Highgate, Birmingham, B12 0XB, England
Tel: +44 (0)121 446 6527
The Church of St. Alban the Martyr can be found in the Highgate district of Birmingham and dates back to the late 19th century. With a tall church tower and many detailed features, the overall design of this church is very grand and resembles a grand cathedral. Birmingham's Church of St. Alban the Martyr has recently been restored and renovated.
Open hours: daily

Address: Griffins Brook Lane, Bournville, Birmingham, B30 1QE, England
Tel: +44 (0)121 458 5273
In the heart of the Bournville area of Birmingham, Lazarica Serbian Orthodox Church was built in the mid-20th century, although the designs and carvings were based on medieval architecture.
Open hours: daily

Other churches, cathedrals and abbeys close to Birmingham include: