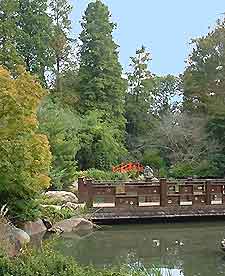 As the most densely populated city in the whole of Britain after London, it is reassuring that Birmingham has successfully managed to retain so many important green spaces, with public parks, golf courses and landscaped gardens a plenty. Many of these are based within the city's suburbs, such as those of Edgbaston, Harborne, Kings Heath, Rednal and Sutton Coldfield, while further parks reside in nearby Castle Bromwich, Solihull and Warwick.

Located in the Kings Heath area and on the southern side of the city, Cannon Hill Park is one of the most popular, being within easy reach of the university campus and used as a location for many local events, including the annual Great Birmingham Run each October. Also deserving a very strong recommendation, the Birmingham Botanical Gardens boast more than 7,000 plants, a number of national collections, an open-air theatre, a Pavilion tearoom on the terrace, and a bandstand with music each Sunday afternoon, throughout the summer. 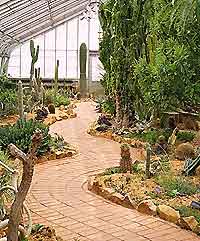 Address: Westbourne Road, Edgbaston, Birmingham, B15 3TR, England
Tel: +44 (0)121 454 1860
Opened in 1832, almost 200 years ago, the Birmingham Botanical Gardens are situated in the Edgbaston area, on the south-western side of the city. Onsite attractions include giant glasshouses full of tropical plants, a large collection of cacti and succulents, ponds, water features, flower borders, lawns, aviaries, rock gardens, a plant nursery, a restaurant and a gift shop. The National Bonsai Collection adds further interest and these old dwarfed trees include a juniper from Japan reputed to be over 250 years old. You may also like to check out the white-domed aviaries on the main lawn, whilst keeping an eye out for the free-roaming peacocks.
Admission: charge, discounts available for children, families and group, children five years old and under are free
Open hours: Monday to Friday - 09:00 to 19:00, Saturday and Sunday - 10:00 to 20:00

Address: Trinity Road, Aston, Birmingham, B6 6JD, England
Tel: +44 (0)121 327 0062
Managed by the City Council, Aston Park resides within the northerly Handsworth area, where it covers more than 20 hectares / 50 acres. Dating back to the mid-19th century, this mature public parkland is a popular area for relaxing and features large expanses of lawns, suitable for sporting activities. The Aston Villa FC football ground is close by, while the estate is also home to the historic Aston Hall, a grand mansion built in the early part of the 17th century and known for its eye-catching Jacobean-style architecture.
Open hours: daily

Address: Russell Road, Moseley, Birmingham, B12 9QH, England
Tel: +44 (0)121 442 4226
Cannon Hill Park currently covers approximately 250 acres / 100 hectares and began its life in 1873, when a major benefactor of the city kindly donated much meadowland, paying for it to be drained and landscaped, with the initial creation of two lakes. Further land has been obtained over the years and the grounds now offer boating, playground areas for children, glasshouses, nature trails, cycle routes, picnic areas and tennis courts. Each Saturday morning, runners gather here for the weekly 3-mile / 5-km Parkrun race.
Open hours: daily - 07:30 to dusk
Admission: free

Address: Chester Road, Castle Bromwich, B36 9BT, England
Tel: +44 (0)121 749 4100
The Castle Bromwich Gardens date back to the late-17th century and are filled with large, mature trees and shrubs. Covering around 10 acres / 4 hectares and lying on the far easterly outskirts of the city, the grounds come with walled gardens, an orangery, a hedge-maze, much formal landscaping and topiary, a café, a plant centre and a themed gift shop. Look out for the seasonal events, which include Spring Bulb celebrations, Easter festivities, a Rare Plants Fair, car boot sales, flower demonstrations and Apple Day each October.
Open hours: April to October, Tuesday to Thursday - 11:00 to 16:00, Saturday and Sunday - 12:30 to 16:30; November to March, Tuesday to Thursday - 11:00 to 15:00
Admission: charge, discounts available for children and seniors

Address: Wellesbourne, Warwick, CV35 9ER, England
Tel: +44 (0)1789 470277
Charlecote Park, roughly 40 minutes to the south-east of Birmingham, is centred around a magnificent 16th-century manor house. With large gardens, herds of deer, views of the River Avon and sweeping formal lawns, the park covers an area of around 185 acres / 75 hectares, being landscaped by Capability Brown in the middle of the 18th century. Interestingly, it is widely believed that world-famous playwright William Shakespeare once came here to poach rabbits, when he was a young man.
Open hours: April to November, Friday to Tuesday - 11:00 to 18:00
Admission: charge, discounts available for children and families, free to members of the National Trust

Address: Cambridge Street, Birmingham, B1 2NP, England
Tel: +44 (0)121 643 2514
The relatively compact City Centre Gardens are located in the heart of the city, offering a much-used tranquil space and featuring tropical plants, colourful flower beds, pathways, benches and large trees. Many of the city's biggest attractions are just a stroll away, such as the International Convention Centre and Symphony Hall, the Repertory Theatre, the National Indoor Arena and the SeaLife Centre.
Open hours: daily - dawn to dusk
Admission: free

Address: Elmdon Park Road, Solihull, B92 9EJ, England
Tel: +44 (0)121 704 6130
Functioning as an important local nature reserve, Elmdon Park is based in nearby Solihull, close to Birmingham International Airport and the Hatchford Brook Golf Centre. Full of wildlife, including large numbers of indigenous birds, visitors will also find mature trees, a lake, a fun playground for children, woodland walks, a meadow and a heritage trail, where you will learn all about the history of the past Elmdon Hall and also St. Nicolas' Church.
Open hours: daily - dawn to dusk
Admission: free

Address: Vicarage Park, Kings Heath, Birmingham, B14 7TQ, England
Tel: +44 (0)121 444 2848
Kings Heath Park, in the southerly Moseley area, is managed by the City Council and became well-known for its frequent appearances on BBC2's popular Gardeners' World television programme. Full of mature plant specimens, Kings Heath is located in an idyllic setting and is always full of seasonal colour. The onsite Horticultural Training Centre may well be of interest to those with green fingers.
Open hours: daily - 07:30 to dusk
Admission: free

Address: Warren Lane, Rednal, Birmingham, B45 8ER, England
Tel: +44 (0)121 447 7106
Lickey Hills Country Park can be found in the Rednal area, on the far south-westerly outskirts of the city, and covers more than 200 hectares / 500 acres. With enormous trees, natural areas of wild flowers, woodlands and open grassland, there is also a popular golf course, a bowling green, tennis courts and cycle trails. Look out for the obelisk commemorating the 6th Earl of Plymouth, as well as nearby Beacon Hill, where an elaborate 'toposcope' indicates directions and distances to surrounding places of interest.
Open hours: daily - 10:00 to 19:00, winter - 10:00 to 17:00
Admission: free

Address: Court Oak Road, Harborne, Birmingham, B17 9AH, England
Tel: +44 (0)121 681 6098
Located on the south-western outskirts of Birmingham and close to the Harborne Golf Course, Queen's Park is an especially charming spot with an interesting history. Opened more than 100 years ago to commemorate the Diamond Jubilee of Queen Victoria, attractions include manicured-bowling greens, tennis courts, a playground area, benches and flower borders, which are filled with colourful annuals in the summer.
Open hours: daily
Admission: free

Address: Park Road, Sutton Coldfield, Birmingham, B73 6BU, England
Tel: +44 (0)121 355 6370
Sutton Park is the largest park in the whole region and one of Europe's biggest, covering a whopping 2,400 acres / 970 hectares and located roughly 20 minutes to the north-east, within the suburb of Sutton Coldfield. There are spacious woodlands, a notable national nature reserve, no less than seven lakes, marshlands, plenty of benches, a restaurant and a visitor centre. Seasonal events taking place here include the Seven Pools Run each March, the Hill West 10K Race in May and the Great Midlands Fun Run in June.
Open hours: daily
Admission: free

Address: Washwood Heath Road (B4114), Birmingham, B8 2HB, England
Tel: +44 (0)121 643 2514
Ward End Park can be found in the Saltley area, to the east of the city centre. This glorious parkland was opened to the public in 1904 and features a large boating lake, lawns, trees, shrubs, pathways, nature trails and seating areas. Ward End Park House is a particular highlight and dates all the way back to 1759.
Open hours: daily
Admission: free

Address: Clapgate Lane, Birmingham, B32 3DH, England
Tel: +44 (0)121 421 7575
Woodgate Valley Country Park is situated to the west of the University of Birmingham campus, close to a large housing estate in the Northfield area. Covering over 400 acres/ 160 hectares and established in the early 1980s, the grounds are home to a popular visitor centre, wildlife areas, walking trails, lawns suitable for sports, seating and a small city farm. Roughly 80 different species of birds live here, including both kingfishers and marsh harriers, with 'Wild Food Walks' being a great way to get to know the creatures calling the park their home. Of note, the Hole Farm Trekking Centre is located next door, should you fancy a pony ride.
Open hours: daily
Admission: free


Parks within driving distance of Birmingham include: