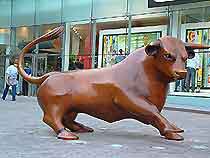 The gay scene in Birmingham is certainly an established one, so much so in fact that this sizeable city now boasts its very own Gay Village neighbourhood, which locals often refer to as the city's 'gaybourhood'.

Located alongside the Chinese Quarter and Highgate, on the southern side of the city, this district is to be found around Hurst Street and is home to a real mixture of LGBT shops, bars, clubs and businesses. These include Bar Jester on Holloway Circus and the Missing Bar on Bromsgrove Street. Recent reinvestment by the city has seen the planting of additional trees, wider pavements to allow al fresco dining and more ornate, improved street lights.

Each week, visitors arrive in this part of Birmingham in their thousands, coming to make the most of the vibrant nightlife attractions and live entertainment on offer. Others simply come to soak up the atmosphere, or to visit the adult shops, cinema or health clinic.

The Birmingham Gay Village began its life in the 1970s, when it was centered around the Windmill Bar and the Nightingale Club. Expansion occurred during the following decade, including the renovation of warehouse buildings into trendy bars and nightspots. These attractions quickly began to successfully capitalise on the up-and-coming LGBT market.


It is estimated that the gay and lesbian population in the city of Birmingham equates to roughly 75,000 people and this number continues to steadily grow.

Now one of England's premier LGBT destinations, Birmingham sees its popularity soar each year at the end of May, when its Pride Festival comes to town.

Held on the May bank holiday weekend, this event currently draws in the region of 100,000 visitors. There are drag queens galore, along with all kinds of flamboyant entertainment, market stalls, fun fairground rides and marquees, although some of these now charge for entrance.

Another major draw for this busy West Midlands city is the Pride Ball each spring, which is staged at the Birmingham International Convention Center and attracts more than 1,000 attendees. This event began its life in the late 1990s, when it first took place at the Birmingham Botanical Gardens and soon outgrew the available space due to its extreme popularity.