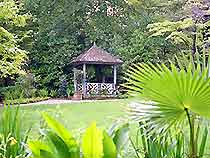 Families spending time in Birmingham will find a number of attractions suitable for children. Many more choices present themselves to those prepared to travel outside of the city, with further offerings based within the neighbouring counties of Staffordshire, Leicestershire and Warwickshire. Close to the city centre and just across from the International Convention Centre, the impressive National Sea Life Centre is a major draw card for visiting families.

The Birmingham Nature Centre is another notable attraction in the city and the resident creatures are always popular with younger children, while teenagers may well prefer an afternoon spent paintballing at either the Combat Game Park or the Paintball Park. These days, farms seem to be a major tourist magnet and there are certainly plenty close by, such as the Hoo Farm Animal Kingdom at Telford and the Ash End House Children's Farm near Tamworth.

If you prefer wildlife parks and zoological gardens, then the nearby West Midland Safari and Leisure Park at Bewdley is quite hard to improve upon. Also very much of note and within reach of Birmingham are the smaller zoos of both Dudley and Twycross. For thrills and rollercoasters, a day spent at the Drayton Manor Theme Park will certainly be a memorable one, for all the right reasons. 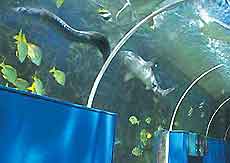 Address: Brindleyplace, The Waters Edge, Birmingham, B1 2HL, England
Tel: +44 (0)121 633 4700
With hammerhead sharks, giant turtles, crabs, rays, large tanks, all kinds of marine fish living in 'Nemo's Kingdom', and a glass tunnel, the National Sea Life Centre entertains its visitors with feeding displays and talks. Children will enjoy holding the crabs and touching the starfish at the Interactive Rockpool, as well as watching the films in the 4D cinema and having fun with the soft-play equipment.
Open hours: daily - 10:00 to 17:00
Admission: charge, discounts available for children

Address: Pershore Road, Birmingham, B5 7RL, England
Tel: +44 (0)121 472 7775
Situated next to Cannon Hill Park and the Tally-Ho Grounds, this important Nature Centre is full of wildlife and wild animals, such as deer, rabbits, foxes, owls, otters and red squirrels, as well as some more exotic creatures, including beavers, capybara, meerkats, reptiles, wallabies and red pandas. Babu the red panda was voted 'Brummie of the Year' after his escape in 2005, when he was on the loose for a total of four days, until being spotted by a local walking their dog. Other notable attractions include a small petting zoo, a visitor centre, a café, wildlife trails and a picnic area.
Open hours: daily - 10:00 to 17:00
Admission: charge, discounts available for seniors, children are free

Address: Tamworth, B78 3TW, England
Tel: +44 (0)1827 287979
Covering 280 acres / 113 hectares, the popular Drayton Manor Theme Park is situated close to Tamworth and offers a memorable day out for children, from toddlers to teens. Since its opening in 1949, this park has seen many changes and now boasts various funfair rides and rollercoasters, including the only stand-up rollercoaster in the whole of Europe, named the Shockwave. Further popular rides include the Apocalypse, G Force, Maelstrom, Pandemonium and Stormforce. The rides are spread around five distinct zones, namely Action Park, Aerial Park, Fisherman's Wharf, Pirate Cove and Thomas Land, where Thomas the Tank Engine is the main theme. There is also a zoo, filled with reptiles, insects, friendly farmyard animals and a number of small mammals.
Open hours: March to October, daily - 10:30 to 18:00
Admission: charge, discounts available for children, families and seniors, small children are free

Address: Bodymoor Heath, Sutton Coldfield, B76 0DY, England
Tel: +44 (0)1827 872660
The Kingsbury Water Park is to be found in neighbouring Sutton Coldfield and covers over 600 acres / 240 hectares. With numerous large lakes and ponds, highlights include nature trails, wildlife, bird watching (with hides), a visitor centre, a café, a gift shop, a small farm and a playground area for young children. The park is also popular for its water sports, such as jet skiing, water skiing, sailing, windsurfing and fishing.
Open hours: daily - dawn to dusk
Admission: free, charge for car park

Address: Festival Park, Hanley, Stoke-On-Trent, ST1 5PU, England
Tel: +44 (0)1782 205 747
Waterworld is a leading attraction in nearby Stoke-On-Trent, with annual visitor numbers known to top 400,000. This large aqua park is completely enclosed and features a water rollercoaster, lots of slides, three separate swimming pools, cafés, bars, music and countless areas where you can relax. Popular slides include the Black Hole, the Super Flume and the Twister. The fun Aqua Discos on Friday evenings are worth looking out for.
Open hours: Monday, Tuesday, Saturday and Sunday - 10:00 to 18:00, Wednesday - 10:00 to 19:00, Thursday - 10:00 to 20:00, Friday - 10:00 to 21:00 (during school holidays)
Admission: charge, discounts available for children and families

Address: Spring Grove, Bewdley, Worcester, DY12 1LF, England
Tel: +44 (0)1299 400700
The West Midland Safari and Leisure Park is located in the town of Bewdley, 20 miles / 32 km to the south-west of nearby Birmingham. Covering more than 200 acres / 80 hectares, highlights include many exotic creatures, amusement park rides, displays, cafés and a gift shop. The safari park was established in the early 1970s and visitors are able to drive through a series of spacious animal paddocks, passing by giraffes, white rhinos, zebras, Bengal tigers, African elephants and rare Père David's deer. Children will particularly enjoy the Discovery Trail and its Sea Lion Theatre, the hands-on Animal Encounters and the Hippo Lakes, as well as the snakes, frogs, turtles and crocodiles living in Mark O'Shea's Reptile World.
Open hours: March to November - from 10:00
Admission: charge, discounts available for children

Address: The Broadway, Dudley, West Midlands, DY1 4QB, England
Tel: +44 (0)1384 215314
Dudley Zoo is situated on the westerly outskirts of Birmingham and is just a short drive away, being based within the estate of 13th-century Dudley Castle. Opened way back in 1937, the zoological gardens cover more than 40 acres / 16 hectares and are called home by many rare animals and endangered species. There are now more than 1,000 animals comprising over 200 individual species, with favourites including lions, tigers, orangutans, bears, giraffes, tapirs and squirrel monkeys. A recent Heritage Lottery grant exceeding £1 million has seen much refurbishment for the zoo.
Open hours: daily, 10:00 to 16:30, winter - 10:00 to 15:30
Admission: charge, discounts available for children and seniors , children four years old and under are free

Address: Atherstone, near Coventry, Warwickshire, CV9 3PX, England
Tel: +44 (0)1827 880250
Located to the north-east of central Birmingham and close to the Warwickshire border, Twycross Zoo has been open since 1963 and covers an area of some 80 acres / 32 hectares. The zoo has become well-known for its commendable conservation work and caters well for younger visitors, with its playground, informative displays and gift shop, complete with cuddly creatures. Twycross Zoo has much to boast about, including one of the largest primate collections in the world, rare Amur leopards, Bactrian camels, giraffes, penguins, sea lions and a group of female Asian elephants, with breeding successes following artificial insemination. A recently opened modern art gallery provides interest for grown ups.
Open hours: daily - 10:00 to 17:30, winter - 10:00 to 16:00
Admission: charge, discounts available for children and seniors

Address: Wenlock Lodge, Acton Scott, Church Stretton, Ludlow, SY6 6QH, England
Tel: +44 (0)1694 781306
The Acton Scott Historic Working Farm is situated in Shropshire, to the west of Birmingham and reachable in slightly more than an hour. Attractions are situated within the original 18th-century farm buildings and come in the form of a large number of farmyard animals, such as cows, pigs, poultry and sheep, together with some interesting rare-breed animals. Of note, the estate is something of a local celebrity, appearing on the BBC2 television programme 'Victorian Farm' in 2009.
Open hours: March to October, Tuesday to Sunday - 10:00 to 17:00
Admission: charge, discounts available for children and seniors, children five years old and under are free

Address: Billingsley, Bridgnorth, WV16 6PF, England
Tel: +44 (0)1299 841255
Rays Farm can be reached in approximately one hour, being located to the far west of Birmingham, in the Shropshire village of Billingsley. Full of friendly farmyard animals and pets, the farm boasts a large collection of owls, different species of deer, undercover picnic tables, a cafe and gift shop, and more than 50 different themed wooden sculptures, including a sizeable fantasy dragon.
Open hours: March to December - 10:00 to 17:30 (earlier during winter months), January and February, Saturday and Sunday - 10:00 to 16:00
Admission: charge, discounts available for children and seniors

Address: Preston-On-The-Weald Moors, Telford, TF6 6DJ, England
Tel: +44 (0)1952 677917
Based in nearby Telford, some 40 miles / 64 km to the north-west of central Birmingham, the Hoo Farm Animal Kingdom offers plenty of animal-related attractions and activities to amuse all ages. These include a real assortment of creatures, such as sheep, pigs, deer, foxes, ostriches, llamas, chipmunks, parrots, reptiles and more, covering over 100 different species. You can also often bottle-feed young lambs and goats, follow the Farm Trail, have a go on the quad bikes, groom the donkeys, and watch the goat races and the sheep steeplechase. There are both indoor and outdoor play areas, along with coin-operated electric mini-tractors and refreshments in the Cow Shed Tea Room.
Open hours: March to December, daily - 10:00 to 17:00
Admission: charge, discounts available for children and seniors

Address: Butts Lane, Tanworth in Arden, Birmingham, B94 5AE, England
Tel: +44 (0)1564 742251
Providing a pleasant family day out, the Umberslade Children's Farm resides to the south of the city centre, being a 30-minute drive away and sited within the small village of Tanworth in Arden. Visitors can expect tractor rides, pony rides, playgrounds and even ferret racing, as well as frequent opportunities for bottle-feeding young lambs and the chance to hold rabbits, guinea pigs and chicks. If you are feeling hungry, then rest assured that the Farmhouse Cafe is on hand, serving up everything from a hearty fried breakfast to toasted sandwiches, jacket potatoes, ploughman's lunches, homemade soup and plenty of snacks.
Open hours: March to September, daily - 10:00 to 17:00
Admission: charge, discounts available for children, families and seniors

Address: Middleton Lane, Middleton, Near Tamworth, Birmingham, B78 2BL, England
Tel: +44 (0)121 329 3240
Ash End House Children's Farm is to be found 20 minutes to the north-east of the city, being close to Tamworth and east of Sutton Coldfield. This is certainly a popular family attraction in the summer, when you will usually find newly hatched chicks and other baby animals. There are also pony rides, traditional craft demonstrations, seasonal Shire horse days and fun Teddy bears' picnics, while the Big Play Barn offers a good choice of soft-play toys.
Open hours: daily - 10:00 to 17:00 (closes earlier in the winter)

Address: Deansford Lane, Kidderminster, Worcestershire, DY10 3NN, England
Tel: +44 (0)121 236 0022
Paintball Park is situated 16 miles / 26 km to the south-west of the city centre, being 30 minutes away by car and located in between the village of Blakedown and the town of Kidderminster. The attraction resides within the spreading Bissell Wood and comes with more than 200 acres / 80 hectares of woodland and scenic countryside. This exciting action game is popular with older children, as well as with stag and hen parties visiting the city for a weekend of fun. Old tanks and military equipment all add to the overall atmosphere, making the woods appear like an authentic war zone.
Open hours: daily
Admission: charge