Warwickshire is one of the most visited counties in England. Whilst much of its appeal to tourists may lie in its picturesque villages and pastoral English countryside, the tourism scene is completely dominated by the attractions of a certain Elizabethan playwright.

The Warwickshire town of Stratford-upon-Avon is best known as the birthplace of William Shakespeare. All things Shakespeare-related can be found here, including what are known as 'The Shakespeare Houses'. Among them is Anne Hathaway's cottage and Mary Arden's House, the latter of which was the home of Shakespeare's mother.

For history buffs, castle lovers and day tripping families, it makes perfect sense to head on from here to Warwick Castle, a magnificent medieval castle that counts as one of the most substantial castles surviving in England today. Grown-ups usually prefer to linger a while, admiring the castle's splendid interior or the panoramic views that can be enjoyed from the ramparts. Children, on the other hand, tend to make a beeline for the dungeons, checking out their in-depth exploration of medieval torture.

Lesser-known attractions in Warwickshire include Kenilworth Castle and the elegant town of Royal Leamington Spa, where you can explore in a rather sedate and unhurried fashion, visiting the town's pump rooms, appreciating the Georgian architecture and strolling through the flower-filled gardens.

Every year, Stoneleigh Park in Warwickshire echoes to the throaty sound of motor vehicles, old and new. The park has become a popular venue for such events as the National Kit Car Motor Show and the International Historic Motorsport Show. 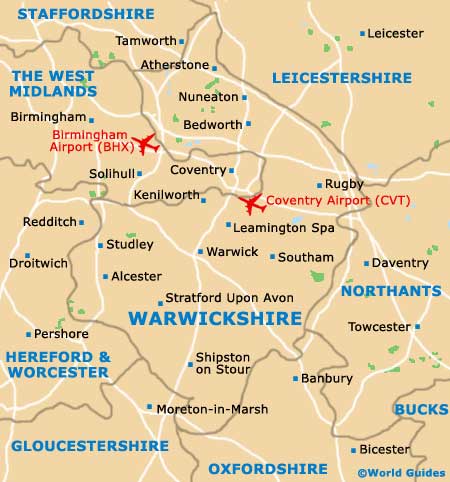