The Eastern England county of Lincolnshire throws up images of a rural idyll that is punctuated by quaint villages in which nothing really happens. In short, Lincolnshire life can often be viewed as 'off the beaten track' and rather uneventful.

It is true that many of its towns are pretty and relatively unspoiled, and that the pace of life is generally much slower than elsewhere. The county boasts a nostalgic air that harks back to times past. Fishing and shooting are still popular leisure activities here. Many a film director has taken advantage of all this 'olde worlde' atmosphere, choosing Lincolnshire as a backdrop for their movies.

The county town of Lincoln is chock full of history, from its fine Gothic cathedral to the Bishops' Palace and Lincoln Castle, which comes complete with prison. In recent years, Lincoln's visitor numbers have been given a huge boost thanks to the institution of its Christmas Market, which has become one of the largest of its kind in Europe.

The Lincolnshire landscape offers an abundance of difference scenery. North-east of Lincoln are the gentle hills of the Lincolnshire Wold. In the south and east are areas of marshland and flat fens. Created by the county's farmers by reclaiming land from the sea, this whole area is crisscrossed by rivers and dykes that are intended to hold back the tide.

Wherever you happen to be in Lincolnshire, the county claims to have one advantage over many others. Here, on the east coast of England, the weather tends to be drier. Indeed, it only receives around half of the average annual rainfall enjoyed elsewhere.

That is definitely a boon if you have chosen to spend your holiday at the Lincolnshire seaside resort of Skegness. That said, the town's slogan, 'Skegness is so bracing' indicates that it can be quite chilly in this part of the world. 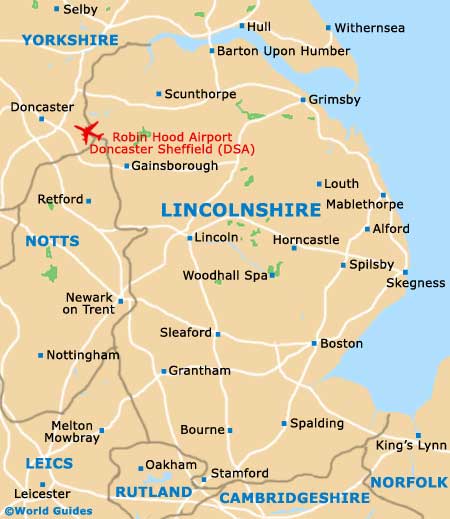