There is no doubt that Gloucestershire is a quintessentially English county. Its county town of Gloucester is nestled cosily in the valley of the River Severn. Part of the Cotswolds also comes within its boundaries.

This popular tourist destination is characterised by chocolate-box villages with a scattering of thatched stone cottages and quaint English pubs. The whole of the Forest of Dean falls within Gloucestershire, too. Created in 1938, this was the first ever national park to be set up in the UK. A network of paths runs through this ancient forest. The dense undergrowth offers an ideal hiding place for the wild boar that have returned to roam the forest in ever greater numbers.

Gloucestershire still wears its history very visibly, from the towering pinnacles of Gloucester Cathedral, which featured in several 'Harry Potter' films, to the Tudor buildings of Tewkesbury and the very elegant Georgian architecture of Cheltenham. It is little wonder then that Gloucestershire has become the favoured home of many members of the British royal family. Royal residences in the county include both Highgrove House and Gatcombe Park.

It has to be said that Gloucestershire plays host to some rather unusual events. At certain times of the year, surfing enthusiasts gather on the banks of the River Severn to ride the perfect wave. The 'Severn bore', or tidal wave phenomenon, is said to be at its most dramatic in spring, when it can rise as high as 7 feet / 2 metres.

Then there is the annual cheese-rolling event, which takes place near the town of Brockworth. In recent years, there is been so much interest in this rather odd spectacle that people have come from all over the world just to witness dozens of giant Double Gloucester cheeses bumping their way down Cooper's Hill.

In July 2007, Gloucestershire suffered the worst flooding ever seen in the UK, following an unusually high amount of rainfall during the early summer months. Rescue work was carried out by the Royal Air Force and this was the largest peacetime operation ever recorded. 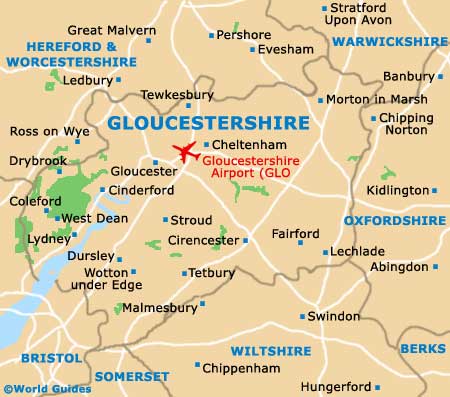