East Riding of Yorkshire is a no-nonsense sort of place. Its largest city, Hull - more properly known as Kingston upon Hull, is where the county's beating heart lies. It is a solid city that just gets on with the business in hand, which in this case is shipping. Hull is still very much a busy commercial port.

Hull is also the site of the county's most iconic landmark, the Humber Bridge, which is suspended above the broad expanse of the River Humber and has linked East Riding of Yorkshire with neighbouring Lincolnshire since the early 1980s. Since then, the bridge has saved literally millions of vehicle miles.

The bridge not withstanding, Hull wouldn't necessarily win a competition for being the most handsome of cities in this part of the world. That award should go instead to the county town of Beverley, which still goes largely unnoticed, despite its impressive minster and plethora of 18th-century architecture.

Head out of Hull and you venture into a world of seaside resorts that conjures up memories of holidays gone by. There are promenades to walk along, candy floss to be eaten and often a funfair or two for daytime and evening entertainment. Even the names of the towns, which include Bridlington and Filey, summon up more than a hint of nostalgia.

The coastline of East Riding of Yorkshire is about more than beaches, though. The Flamborough Cliffs Nature Reserve is home to one of Britain's most spectacular chalk cliffs, as well as many nesting sea birds. If a touch of drama isn't your thing, then the Yorkshire Wolds offer the type of countryside - namely gentle rolling hills, that positively inspires you to get on your bike or don a pair of walking shoes.

One of East Riding's most famous residents was Philip Larkin. This English poet and novelist tended to shun the limelight, spending some 30 years presiding over the bookshelves in the library at Hull University. 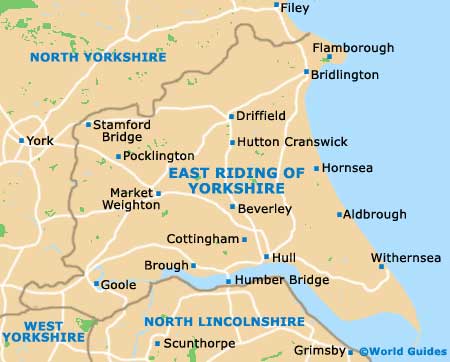