Cumbria is one of England's most northerly counties. It is dominated by the Lake District National Park - usually abbreviated to 'The Lakes', with its towering mountains, glassy lakes and quaint historic villages.

The Lakes give walking enthusiasts something to dream about. There is nothing quite like climbing one of its four highest mountains - Helvellyn, Scafell Pike, Scafell or Skiddaw, and surveying the fantastic view that unfurls below. Before heading out for a day on the fells, many walkers consult Alfred Wainwright's beautifully illustrated 'Pictorial Guide to the Lakeland Fells', first published in the 1950s. Wainwright was an avid fan of this part of the world. The 42 fells of the Lake District also give runners something of a challenge. The Bob Graham Round is a circuit that covers the fells and, to belong to the Bob Graham Club, you need to be able to run all of them within 24 hours.

Likewise, there are plenty of opportunities to mess around in the water. The Lake District has no less than 19 major lakes and reservoirs, with lots of smaller tarns as well. A cruise on Windermere Lake ranks as the top visitor attraction in Cumbria.

Tourism is hugely important in Cumbria, but so too is agriculture. Away from the mountains and the tea shops, the crowds tend to thin out and Cumbria shows an altogether more gentle side to its nature. To the east lies the Eden Valley, with its rolling green hills and sandy beaches.

Cumbria has inspired many a poet and writer, from Wordsworth to Ruskin. The author Beatrix Potter developed a love for animals and nature when holidaying in the Lake District. She went on to live at Hill Top Farm in Near Sawrey and a number of places in the village appear in such books as 'The Tale of Tom Kitten'. 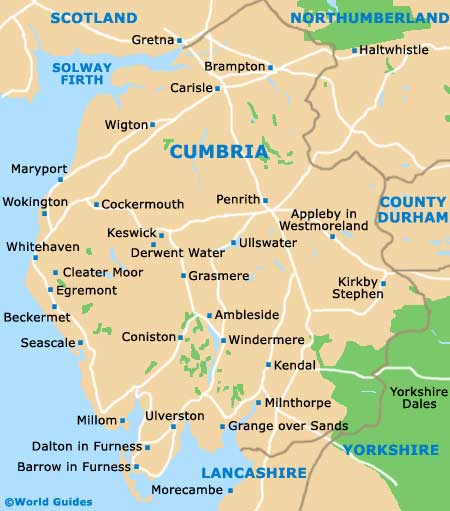