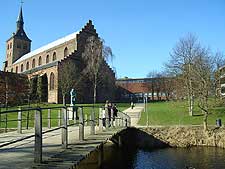 Named after a Nordic god, the Danish city of Odense boasts a rich Viking heritage and is known to have been established more than 1,000 years ago. During the mid-18th century, Odense actually became Denmark's biggest provincial town and soon after, following the construction of a lengthy canal linking the Odense Fjord and the sea, the city continued to prosper and is now Funen's island capital, being home to an important university (Syddansk Universitet - SDU), with around 15,000 students.

Today, Odense has grown to be the third-biggest of Denmark's cities, after both Copenhagen and Aarhus. Tourists will find plenty to fill their days, with a glorious Gothic cathedral, many intriguing museums and a host of boat trips around the archipelago.

Make time to properly explore the tourist attractions and half-timbered buildings along the streets of Nedergade, Overgade and Vestergade, and visit the tourism information centre (Odense Touristbureau) on the Radhuset. Consider purchasing the Odense Eventyrpas (Adventure Pass), which offers free admission to many sights, unlimited use of buses and discounts for the Araft riverboat. 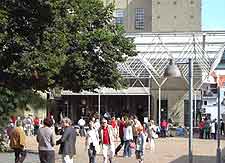 For a great family day out, head to Odense Zoo, which is actually Denmark's second-largest zoo and contains a superb Oceanium, recreations of rain forests, and even a giant squid. Without doubt two of the most famous of all the city's landmarks are the Odense Palace and the Cathedral of King Canute the Holy (Saint Knuds Kirke). The cathedral is famed for its Gothic architecture and dates back to the 12th century. For great city views, tourists can climb the Nonnebakken Hill, which was once home to a number of Viking castles. More information about Odense Tourist Attractions and Landmarks. 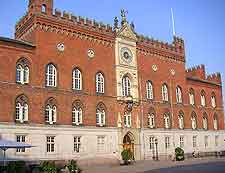 Odense is extremely proud to have been the actual birthplace of Hans Christian Andersen and this is clearly reflected in a number of its attractions. This is particularly so at the Hans Christian Andersen Museum (HC Andersen Hus), which is nothing short of a celebration of his life and contains information about his many famous fairytales, such as the Ugly Duckling. For train buffs, Odense's Danish Railway Museum is the biggest of its kind in the whole of Scandinavia, while also of interest are the buildings within the Funen Village, and the wealth of Danish paintings at the Funen Art Museum (Fyns Kunstmuseum). More information about Odense Museums and Art Galleries.

There is much to see around the island of Funen and various boat trips allow visitors to explore the archipelago. However, since the arrival of the Great Belt Bridge, which connects Funen with Zealand, tourists from Odense can easily reach Copenhagen, the magnificent Danish capital, where attractions include the Amalienborg Palace, the beaches of Gentofte, and the family friendly Tivoli Amusement Park. Also close to Odense are Fredericia, Langeland, Nyborg and Aarhus, Denmark's second-largest city and home to the Aarhus Domkirke cathedral, one of the biggest in the whole country. More information about Odense Attractions Nearby. 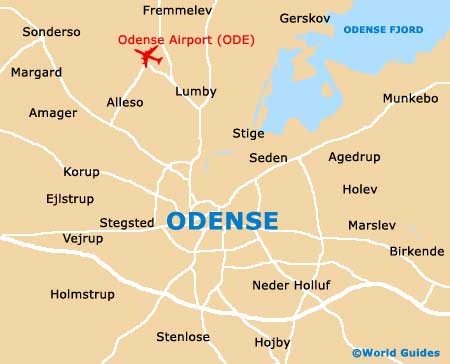