Getting Around, Mauritius Travel, Transport and Car Rental 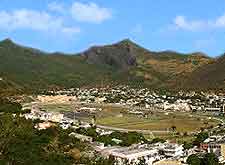 Mauritius is a relatively small island, so travelling around doesn't pose much in the way of obstacles and transport options. Driving around in a hire car is perhaps the easiest way to travel, although getting about by public bus transport does offer a good opportunity to get to grips with local life.

If you are intending to also stay on Réunion, it makes a lot of sense to visit Mauritius first, since the return flights from Sir Seewoosagur Ramgoolam International Airport work out much cheaper. Those planning a holiday of island-hopping should consider the possible savings when purchasing an Indian Ocean Travel Pass, which stays valid for eight weeks and allows fare discounts of approximately 30 percent (Air Austral, Air Mauritius and Air Seychelles only). 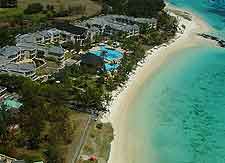 A bus service runs from the airport to Port Louis on a regular basis during the day. Alternatively, there's usually a good supply of taxis outside the terminal. The main terminal offers all the facilities you'd expect, including restaurants, duty free shops and banks. 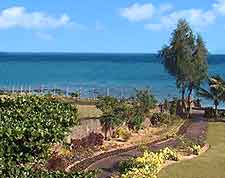 Cars can be hired at the airport, where most of the major hire companies can be found. The majority of the island's roads are paved, although their condition does vary. Generally operators require drivers to be at least 23 years old. If you value a degree of freedom when travelling around, or if you're planning to visit attractions that are off the beaten track, then it's worth hiring a car for all or part of your stay in Mauritius. If you've got an adventurous streak, motorcycles and bicycles are also readily available for hire.

Parking spaces are relatively easy to come by, with Port Louis being home to a series of car parks and on-street parking options. Those choosing to park on the street may need to first purchase parking coupons, available at petrol stations and valid throughout the island. Driving in Port Louis is straightforward, although do allow plenty of time for heavy traffic congestion at the busiest times. 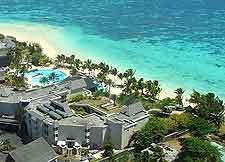 Tel: +230 202 2800
Bus travel in Mauritius has a great deal going for it. Tickets are cheap and the various bus routes on offer do cover much of the island. The only real drawback of travelling by bus is speed, or rather lack of speed, because of frequent stops and the fact that many buses don't operate during the late evening. Express bus transport is therefore preferable when available. Services from Curepipe to Mahebourg, Curepipe to Port Louis, and Grand Baie to Port Louis each take approximately one hour.

Buses can be caught from stops at Immigration Square and Victoria Square in Port Louis. There is also a bus terminus in Curepipe. Tickets can be purchased on the bus. 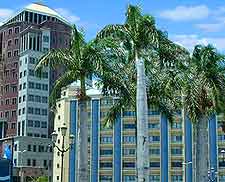 For those tourist attractions that just can't be reached by public transport, it makes sense to take a taxi. Whilst this is not the cheapest way to get around, taxis are particularly useful during the evening, when buses often can't be found. It's best to agree a price for your journey before you set off, to avoid being overcharged. Shared taxi services may be available in some destinations, where you can share the fare with fellow passengers. 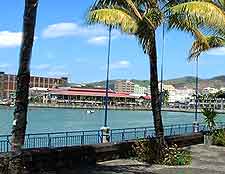 There is only one scheduled domestic ferry operating in Port Louis, providing fortnightly sailings connecting Rodrigues (Port Mathurin). This route takes roughly 25 hours, with tickets available for purchase through travel agents and cabins onboard if required. There are also a number of private operators at the main coastal resorts, providing cruises to nearby islands, deep-sea fishing excursions and scuba diving expeditions.