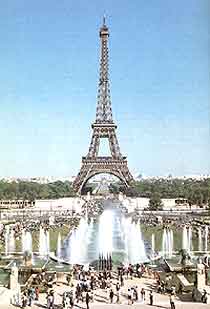 Paris, France is one of the most fascinating and romantic cities in Europe, and tourists visiting this wonderful city will find that things to see and do are almost limitless. Known as the 'City of Light', the beauty of Paris is overwhelming and its architectural and artistic heritage combine with undeniable appeal and world-class tourism to make any visit an unforgettable experience.

Divided into a total of 20 different numbered districts (arrondissements), Paris spirals around the River Seine and comprises almost 400 different metro stations, meaning that finding your away around really is a breeze. The most familiar arrondissements comprise the areas named Bastille, Élysée, Ile de la Cite, Louvre, Marais, Montmartre, Montparnasse, Opéra and the Latin Quarter.

If you are on holiday in the Louvre area, you may well choose to pay a visit to the city's tourist information centre, named the Office de Tourisme et de Congrès de Paris. Further official tourism outlets are to be found at Anvers, Montmartre, the Porte de Versailles and Pyramides, as well as at the train stations known as the Gare de l'Est, the Gare de Lyon and the Gare du Nord.

Visitors will find that there is a vast selection of Paris hotels available to suit every taste and budget. Paris accommodation ranges from the most luxurious hotels and large chains, to small guest houses rich in old-fashioned ambience, many of which are much cheaper than you might first expect. Les Halles is an especially popular central district with plenty of hotels, while others prefer to stay in the Bastille and Marais areas, close to the Gare Montparnasse, within the Écoles and Sorbonne areas of the Latin Quarter, or the Ile St. Louis - a large island on the River Seine itself. Despite having such a choice of hotels, it is always wise to select and book a hotel for your Paris vacation well in advance. Self-catering Paris apartments provide an affordable alternative for long- or short-term stays, rising greatly in price as you approach central attractions, with those based around the Avenue des Champs Élysées being especially desirable.

Many popular Paris apartments line the banks of the River Seine and tend to become more expensive as they approach the Avenue de New York (next to the Palais de Chaillot) and the Quai Branly, which stands alongside the iconic Eiffel Tower (Tour Eiffel) and close to the expansive Parc du Champs de Mars. Accommodation is also in plentiful supply within the vibrant Montmartre area, where the Sacré Coeur and the Moulin Rouge cabaret are amongst the main tourist magnets.

Every year millions of people come to Paris to marvel at its exquisite beauty, savour its exceptional cuisine and indulge in its world-famous shopping. The sheer magnificence of Paris never fails to surpass all expectations and every visitor finds what they are looking for, be it history, architecture, arts and culture, or even the most modern attraction such as Disneyland Paris. Being relatively small in comparison to many capital cities makes Paris a very practical city for visitors, with many of the major points of interest and splendid Parisian landmarks being within walking distance of one another. 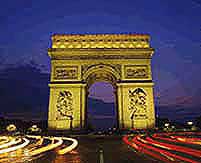 Paris, France is one of the world's best-loved cities and the River Seine, as it weaves its way passing under numerous bridges, adds to the immeasurable beauty and charm, whilst neatly dividing the city into two. Situated north of the river, in the area known as the Rive Droite (Right Bank), are some of the most renowned Paris landmarks including the Champs Élysées leading to l'Arc de Triomphe. Lying at the other end of the Champs Élysées is La Place de la Concorde, a beautiful square where several important historical events have taken place, including the execution of Louis XVI. East of the avenue is the acclaimed Louvre and the Centre Georges Pompidou. South of Centre Pompidou is the majestic Notre Dame on Île de la Cité.

The area to the south of the river is known as the Rive Gauche (Left Bank) and it is here that the Eiffel Tower, the most prominent landmark in Paris and famed throughout the world, dominates the skyline, and provides breathtaking views of the wonderful symmetry of the city. More information about Paris Tourist Attractions.

The city of Paris offers a wide selection of restaurants serving mouthwatering French food, as well as a choice of international cuisine, and the vibrant French nightlife provides a wealth of entertainment options.

Disneyland Paris, Parc Astérix and the Palace of Versailles are just a few of the many places of interest which are situated within easy reach of this French capital.