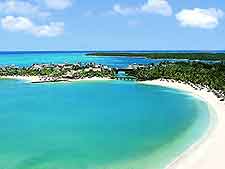 The beaches of Mauritius have long been a major tourist magnet for the island, and understandably so. Many of the best beaches are based on the western side of the island, being within comfortable reach of Port Louis and boasting tourist-friendly facilities, nearby seafood eateries and plenty of water sports opportunities.

Close to both Pereybere and Mont Choisy, Grand Baie is a particularly popular stretch of pale palm-fringed white sand and lies on the north-western coast of Mauritius. Directly west of Vacoas is the tranquil beach of Flic en Flac, where the snorkelling and scuba diving conditions are nothing short of superb. 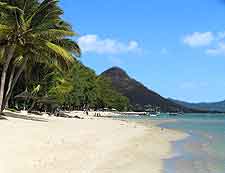 The main beaches on the island are as follows:

Belle Mare
Located on the northern side of Trou d'Eau Douce and stretching all the way to Pointe de Flacq, Belle Mare Beach comprises fine white sand and is approximately 10 km / 6 miles in length. As a result of its beautiful setting and azure-blue ocean, Bella Mare has become extremely popular with Mauritius holiday makers and now boasts a high concentration of luxury accommodation and resorts. 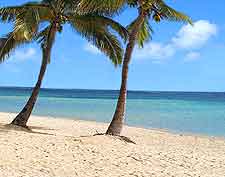 Gris Gris Beach
Sitting in the Souillac area, on the southern coast, Gris Gris Beach offers a different taste of Mauritius, being somewhat rugged and far removed from the island's more commercial beachfront resorts. Gris Gris appears wild and untouched, with a rocky coastline and a strong current, meaning that swimming is not recommended here. 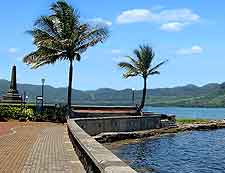 Blue Bay Marine Park
The Blue Bay Marine Park was established to protect the spectacular underwater scenery and colourful coral reefs on the south-eastern side of the island. Lying between Pointe d'Esny and Camp Carol, and close to the Sir Seewoosagur Ramgoolam International Airport, Blue Bay comes with a sizeable public beach and lots of holiday apartments. Several superb scuba diving spots reside around this side of Mauritius and include Roches Zozo and Colorado.

Mont Choisy Beach
Close to Pereybere is Mont Choisy, home to one of the longest beaches on the whole of Mauritius. This curving coastline of soft white sand is easily accessed and therefore popular with both locals and tourists alike. Swimming and snorkelling are amongst the main water-based activities, while sunbathers will find shade provided by a line of mature trees. 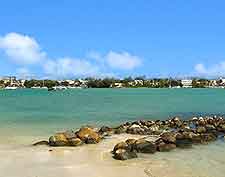 Grand Baie
Sited some 20 km / 12 miles from Port Louis and directly to the north, Grand Baie (Grand Bay) has become a major tourist hub on Mauritius, with its enticing white-sandy beachfront and deep water. Grand Baie features a mixture of water sports opportunities, such as snorkelling and 'underwater walking', where you can literally walk on the floor of the Indian Ocean, wearing special glass helmets piped with air.

Pereybere Beach
Lying on the northern coast of Mauritius, between Trou aux Biches / Mont Choisy Beach and Cap Malheureux, Pereybere Beach sits alongside Grand Baie and has a string of villas and excellent amenities. Crowds of holiday makers flock to Pereybere each summer to sunbathe and swim, and to try their hand at kitesurfing and snorkelling. You may also like to have a go at parasailing, or take a cruise on a glass-bottom boat.

Tamarin Beach
The lengthy south-western coastline around Tamarin, between Le Morne and Flic en Flac, is often referred to as the Black River (Riviere Noire). Tamarin was formerly known as Santosha Bay and comes with sandy coves and old-fashioned resort hotels, and is an especially good spot for hiking and fishing.