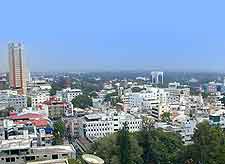 The progressive and modern city of Bangalore is the state capital, being located within India's Karnataka state. Many things that are considered to be 'taboo' and off-limits in India have become acceptable in Bangalore, offering a refreshing and more relaxed atmosphere than other nearby cities.

Founded at the beginning of the 16th century, Bangalore is often referred to as the country 'Garden City', due to its high concentration of parks and green spaces. For tourists visiting Bangalore, much of the main interest lies within the vast Cubbon Park, and also off Mahatma Gandhi Road, better known as simply 'MG Road'.

For tourist information in Bangalore, the Government of India Tourist Office on Church Street is worth some time, as is the Karnataka Tourism Office on Racecourse Road, and also the Karnataka State Tourism Development Corporation on Katsurba Road. However, do try to avoid Bangalore's many unofficial and slightly unscrupulous travel agencies if possible, who don't always deliver quite what they promise. 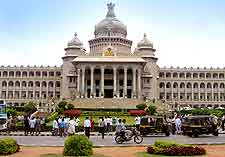 Tourism in Bangalore is thriving and many of the main tourist attractions are especially suitable for families, such as the colourful indigenous fish in the Bangalore Aquarium, the solar-system shows at the Jawaharlal Nehru Planetarium, the miniature train rides at the Jawahar Bal Bhavan amusement park, and the Lal Bagh Botanical Gardens, which combine horticulture and recreation. Both Tipu Sultan's Fort and Palace rank amongst Bangalore's most visited sights, while for concerts and theatrical events, check out the show listing at the popular Rabindra Kalakshetra entertainment venue. More information about Bangalore Tourist Attractions.

Bangalore is full of beautiful, historical edifices and structures, adding plenty of character to this inviting city and many are based within Cubbon Park. Sited within the very heart of the city you will find the architecture of Bangalore Palace hard to miss and famous for rather surprisingly resembling Windsor Castle. Some of the most famous sights in Bangalore include the Vidhana Soudha, the highly elaborate Bull Temple, and the Jumma Masjid, the city's oldest mosque built around 600 years ago. Particularly impressive, consider visiting the enormous Shiva Statue at night-time, when it is illuminated and takes on a whole new appearance. More information about Bangalore Landmarks. 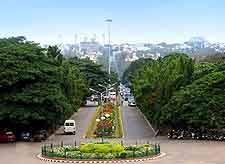 Museums offer added interest within Bangalore and many visitors also enjoy its art galleries. With information about the city's history and many local artefacts, the historic Government Museum is especially popular, while the dinosaur displays and 'Space Hall' rockets are especially popular at the Visvesvaraya Industrial and Technological Museum. For art exhibitions in Bangalore, the Venkatappa Art Gallery stands alongside the Government Museums and is filled with all kinds of paintings. Both the Chitrakala Parishat art complex and the Gallerie Zen are also worth investigating if you are a lover of the arts. More information about Bangalore Museums and Bangalore Art Galleries.

Bangalore offers the perfect setting for those planning to explore southern India, with plenty of tourist attractions lying nearby and perfect for excursions and day trips. Mysore and its endless cultural sights is extremely popular, with many families journeying here for its Chamarajendra Zoological Gardens alone. Tourists with a taste of the great outdoors will enjoy the recreational activities on offer within Ramanagaram, where both hiking trails and rock climbing are in good supply. For something a little different and particularly close to Bangalore, consider visiting the giant 400-year-old Banyan tree at Ramohalli, and the Indian dancing demonstrations at the Nrityagram Dance Village. More information about Bangalore Attractions Nearby.