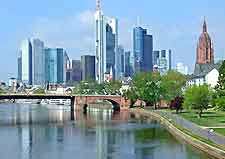 Known in Germany as Frankfurt Am Main, since it lies either side of the River Main, Frankfurt is a huge city and the biggest within the whole Hesse region. The true financial heart of Germany, this city has many flattering nicknames, which often refer to its rather Manhattan-like skyline. Much more than simply a popular tourist city, Frankfurt hosts many world-class trade fairs, including the largest book fair on the planet.

The city is also home to Germany's premier stock exchange and the important Bundesbank, both of which give it true credibility in the world of finance. For tourists visiting the city, pleasure boats along the Main are a great way to begin your sightseeing. Available at the city's tourist information centre and the Hauptbahnhof (main train station), the Frankfurt Card provides many saving discounts relating to both public transport and tourism, and the small outlay is easily recouped. 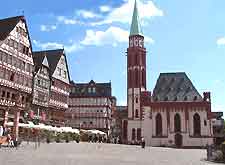 Many excellent tourist attractions are scattered around this German city. Highlights include the Apple Wine Express (Apfelwein Express) - a traditional streetcar touring much of the city; Frankfurt Zoo - an acclaimed facility with an excellent collection of animals, from all around the world; Main River Cruises - with regular boat trips cruising along the river and passing many of the city's best waterfront sights; St. Bartholomew's Cathedral - a magnificent example of historic German architecture at its very best; Frankfurt Botanical Gardens (Botanischer Garten) - with themed areas, colourful plants and many exotic flowers; and the Palm Gardens (Palmengarten) - home to over 2,000 different palm tree species and many more jungle plants. More information about Frankfurt Tourist Attractions 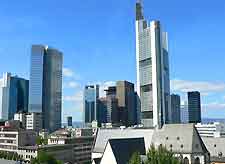 Also worth looking out for within Frankfurt are its many eye-catching landmarks and stylish architecture. Particularly impressive, look out for Commerzbank - the tallest building in Europe and dominating the city's skyline; European Central Bank HQ - important skyscraper headquarters of the notable European Central Bank (ECB); Post Office Tower - a high communications tower built in 1978 and home to a restaurant and nightclub; Frankfurt Stock Exchange (FSE) - the world's third-largest stock and foreign exchange market; and Main Tower - one of the tallest buildings within the city and known for its superb views. More information about Frankfurt Landmarks. 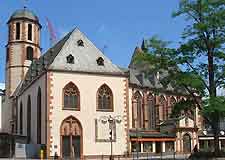 The southern side of Frankfurt's River Main has rightfully earned itself the nickname of Museumsufer, which literally translates as the Museum Embankment, due to its surprisingly high cluster of museums and cultural attractions. Top museums in Frankfurt include the German Film Museum (Deutsches Filmmuseum) - with information about German film-making and cinematic history; Postal Museum - documenting everything from telecommunications to stamps; Museum of Modern Art (MMK) - a triangle-shaped facility with a large collection of contemporary paintings and sculptures; and the Stadel Art Museum - boasting art works by many famous international artists, including both Boticelli and Rembrandt. More information about Frankfurt Museums and Frankfurt Art Galleries.

Within the vicinity of Frankfurt you will find a wealth of appealing tourist attractions, located in the many neighbouring cities and towns. Particularly popular is the vibrant city of Mainz and its magnificent cathedral, the many museums within Darmstadt, the grand palace square (Schlossplatz) and Ducal Palace at nearby Wiesbaden, and the city of Offenbach Am Main, which can be found to the east and offers a castle, large football stadium and tourist attractions relating to its former leather industry. More information about Frankfurt Attractions Nearby.