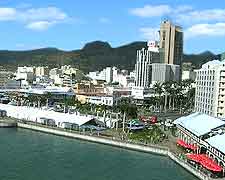 Located in the north-west of the island, on the coast, Port Louis is the capital of Mauritius. During the day, the city is a bustling commercial centre, something that is helped along by the country's tax-free status. Whilst epitomizing a modern city, Port Louis has conserved many of its historic buildings dating back to its colonial era.

Port Louis was named thus by De Nyon, the French Governor of the Island, presumably to honour King Louis XV of France. It took over from Grand Port as the capital of Mauritius in the early 18th century, because the harbour was better protected by the surrounding mountains, making it much easier for sailors to set sail. 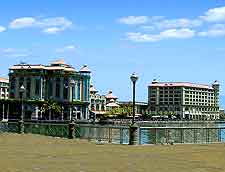 Port Louis really started to develop towards the middle of the 18th century, with the arrival of a hospital, army barracks, a naval base and fortifications. In its hey day, it served as a major port. Whilst it's still very much a busy port today, the importance of Port Louis did decline following the opening of the Suez Canal. Port Louis is densely populated and home to round 165,000 people. During the peak tourist season, that figure can double, with tourists arriving on the island to enjoy a holiday in the sun.

Port Louis has a busy city centre. Most of the city's banks are located here, as is the popular Caudan Waterfront area. Indeed, it's become something of a hub for visitors and locals alike. The colourful Chinatown district, located within the old port, is more like a village in its own right. Head to Chinatown if you're in search of authentic Chinese shops and restaurants. 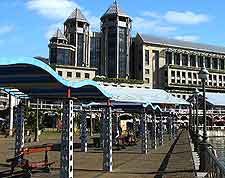 The Plaine Verte district is a lively residential neighbourhood, particularly with the Muslim community of Port Louis. Above the city centre is Fort Adelaide (La Citadelle), which offers great views over the whole city and waterfront. Champ de Mars is today known for its racecourse. However, in the 18th century, it was used as a military parade ground.

The most popular attractions of Port Louis include its Central Market, the Caudan Waterfront, the Natural History Museum, the Champ de Mars, the Aapravasi Ghat, Fort Adelaide (also known as the Citadel) and Signal Mountain.