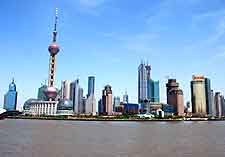 Shanghai is a truly epic city and is the biggest city in the whole of the People's Republic of China. A modern city with massive department stores and stylish buildings towering high into the sky, Shanghai is an expanding and ever-changing metropolis with a prospering tourism industry and plenty of action.

The municipality of Shanghai covers a vast area, although the actual city itself in more compact and moderately sized. Shanghia city centre consists of two main regions, Pudong and Puxi, being separated by the winding Huangpu River. For information about the city's layout and more, the various Shanghai Tourist Information Centres are a great place to begin your visit, with outlets along Nanjing Donglu and Jiujiaochang Lu, near to the eye-catching Temple of the Gods.

The main historic sights are based around the bustling Puxu district, which stands on the western side of the river. The Nanjing Donglu is located in this part of the city and is famous for being the busiest shopping street in the whole of the country, connecting Renmin Square, home of the city's Grand Theatre. When it comes to property, the city contains some of the most pricey real estate values in the whole of China, meaning that accommodation can often be rather expensive. This is particularly so if you wish to stay in the Puxi area, where Shanghai apartments and hotels really do stand in the thick of things, being close to an array of attractions within the Bund district (the historical centre of the city's former International Settlement). Also worth considering is the accommodation based on the northerly side of the city's French Concession, where the vibrant Nanjing Xilu street comes packed with enticing shopping centres. 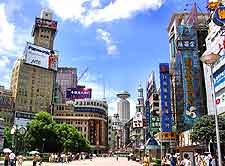 Many top tourist attractions reside in and around the city of Shanghai. The best include the Aquaria 21 Shanghai - a new aquarium full of colourful underwater creatures and themed displays; Riverside Promenade - located alongside the Huangpu River, a great place for a stroll, boasting excellent views of the Bund area and beyond; Dino Beach - Shanghai's most notable water park and home to an enormous wave pool and plenty of fast slides; Huangpu River Trip - a pleasant way to sightsee, with a range of pleasure cruises available; Jinjiang Amusement Park - fun for all the family, with a popular loop-the-loop roller coaster and plenty of other thrill rides; Shanghai Botanical Garden - the perfect respite, contrasting with busy city life and offering traditional Chinese planting; Fuxing Park - a traditional city park, with fountains, play areas, rose gardens and even restaurants; and the Yu Gardens - more than 400 years old and featuring a neighbouring shopping bazaar. More information about Shanghai Tourist Attractions. 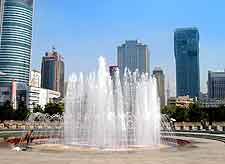 Around Shanghai, many striking landmarks dominate areas of the city and are hard to miss. Those particularly appealing to tourists include the Oriental Pearl TV Tower - one of the tallest structures in the whole of Asia and featuring an exhibition area on the ground level; People's Square - a vast public square surrounded by government buildings and greenery; Shanghai Library - an enormous modern library which is amongst the world's biggest; Temple of the Town God - an important place of worship with a central courtyard; and Jinmao Tower - China's highest building, offering superb views of the city from its 88th-floor observation deck. More information about Shanghai Landmarks. 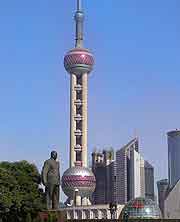 Cultural museums and impressive art galleries are in good supply around the city. The most notable include the Bund Museum - a stylish building housing information about the development of this iconic neighbourhood; Museum of Sex Culture - a particularly risqué museum chronicling China's historic attitudes and morals; Shanghai Municipal History Museum - an outstanding attraction with dioramas of the Huangpu River and information about the city's colonial period; Shanghai Museum - home to a range of historic treasures from all of the Xia, Ming and Qing dynasties; Elegant Gallery - full of contemporary Chinese paintings and stylish modern art works; and also the Shanghai Art Museum - with no less than 12 exhibition halls and plenty of fine art, just waiting to be enjoyed. More information about Shanghai Museums and Shanghai Art Galleries. 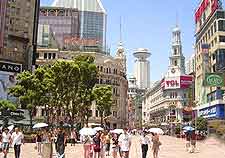 Many appealing cities and towns lie close to Shanghai and have become notable tourist destinations in their own right. Popular excursions include the city of Shaoxing, where the East Lake Temple and Lu Xun's Former Residence are not to be missed. To the north-west of central Shanghai, a trip to the vast city of Suzhou is worth considering and home to a number of classical gardens, while the Blue Lake and the beautiful Hangzhou Bay are just two of the highlights at nearby Hangzhou. More information about Shanghai Attractions Nearby.