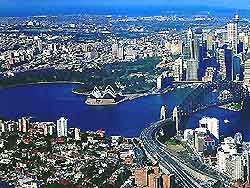 Sydney is one of the oldest, largest, most lively and most exciting cities in Australia. The city is home to the simply spectacular Sydney Harbour, an extremely mild climate, and stretches of heavenly beaches - which include Bondi Beach, Manly Beach and Coogee Beach

The celebrated Sydney Opera House stands on the waterfront and has become known the world over for its dramatic roof, which was designed to resemble the sails of a ship. Also dominating the harbourside is the famous Sydney Harbour Bridge, which actually comes with unusual climbing tours, where intrepid sightseers can scale the bridge itself, or climb the south-eastern Pylon Lookout, and enjoy some of the most stunning views possible.

Dividing the city into northerly and southerly areas, the harbour can also be crossed via a tunnel, which connects the two shores. The most interesting sights tend to reside on the southern side of the harbour, around the Circular Quay, Darlinghurst, Darling Point and the Rocks. City Host Tourist Information Kiosks are located at the Circular Quay (on the corner of Alfred Street and Pitt Street), as well as at Martin Place and the Town Hall on George Street. There is also a useful tourism centre standing alongside the IMAX theatre at Darling Harbour. 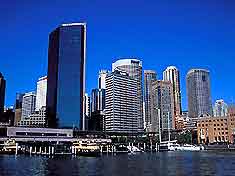 Many of Sydney's hotels have spectacular views of the harbour and the waterfront, and hotels are particularly concentrated in the city centre, the Rocks, Kings Cross and Darlinghurst areas. There are also a number of popular hotels stretching from Bondi Beach to Coogee Beach, and many other hotels in further districts, such as Glebe, Pyrmont, Manly and Queenscliff. City hotels are often filled to capacity and therefore reservations may be required in advance during peak seasons. Sydney backpackers with less money in their pocket may like to consider hostels, such as the Harbour YHA on Cumberland Street and the Central YHA on Rawson Place, the latter of which is housed in a heritage-listed building and enjoys a convenient location just across from the Central Station.


Sydney has many world-class tourist attractions, including the city's very own Visitors' Centre - housed in a historic building dating back to the mid-19th century; Darling Harbour - with wonderful views of the waterfront and numerous shops, restaurants, cafés and exhibitions; the Aussie Duck - a fun and unique way to take a guided tour of the waterfront, travelling both on land and in the harbour; the Sydney Monorail - a state-of-the-art train system, high above the ground; and the Sydney Opera House - created at a cost of around AUD 100 million and proud of its outstanding acoustics. 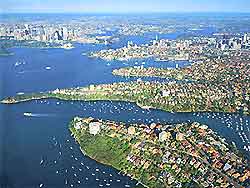 Tourist attractions located close to Sydney include the Blue Mountains, Jenolan Caves, Macquarie Towns Area, Macarthur Country, Hawkesbury River, the Central Coast and the Hunter Valley Wineries - home to some of the best vineyards in the world. Wintertime in Sydney is summertime in the USA and Europe. At this time of year, there are a number of world-class ski resorts located close by, attracting many tourists. The Snowy Mountains are situated in southern New South Wales (NSW) and the journey takes around five hours by car, along the Hume Highway. Regular buses and flights from Sydney are also available. With impressive facilities for skiing, snowboarding and winter sports, there are countless popular skiing resorts nearby. These include Charlotte Pass, Jindabyne, Perisher Blue Valley and Thredbo Village, all of which are within easy reach.

There are also a series of excellent museums spread around the city, such as the Museum of Sydney - one of the most popular and dynamic, with installation and multiple-perspective art; the Australian Museum - an impressive natural history museum established just 40 years after the city was colonised; the Justice and Police Museum - featuring many interesting exhibits about Sydney's criminal past and policing methods; the Macleay Museum - housing stuffed birds and animals, dinosaurs skeletons, photographs, scientific instruments and local information; the Powerhouse Museum - covering social history, decorative arts, science and technology and communication; the Art Gallery of New South Wales (NSW) - home to an enormous collection of 19th- and 20th-century Australian art; the Manly Art Gallery and Museum - a small and interesting art gallery concentrating on the city's very special relationship with Manly beach; and the Sydney Museum of Contemporary Art (MCA) - with a fine collection of modern art from all over the world.

The University of Sydney is the oldest tertiary institution in the whole of Australia and was founded in 1850. The main campus is bounded by Missenden Road, Parramatta Road, Carillon Avenue and City Road, and features more than 30,000 students, a large number of different faculties and spectacular sandstone architecture with detailed stone carvings. Highlights at the University of Sydney include the Great Hall, which has wooden ceilings and impressive stained-glass windows, and the Main Quadrangle, with its classical Gothic-style design.

Sydney, one of the largest and most stunning cities in Australia, is a popular tourist destination at any time of the year. With an exciting atmosphere, Sydney is also home to an interesting mixture of both historic and modern buildings, many of which date back to the late 18th century. It is without question the Opera House, Harbour Bridge and surrounding beaches that continue to remain the number one draw card.