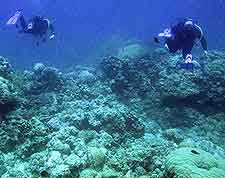 Mauritius is a superb holiday destination famed for its diverse variety of scuba diving and snorkelling possibilities. Marine life is certainly plentiful around the coastline of Mauritius, with the island being virtually encompassed by a long barrier reefs and beautiful lagoons.

Away from the main island and still a part of Mauritius, Rodrigues is another good spot for scuba diving and boasts a wealth of colourful fish and coral reefs.

Scuba diving conditions around Mauritius tend to be at their best in October, November and December, and again in March and April. Just under 50 individual professional scuba diving centres are scattered about the island, most of which are members of the MSDA (Mauritius Scuba Diving Association). 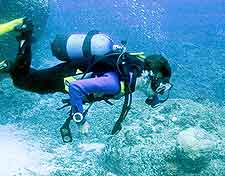 The northern shore of Mauritius draws scuba divers of all abilities, with its various old shipwrecks and top dive spots. Especially notable are the neighbouring islands of both Coin de Mire and Ile Plate (Flat Island), where you may be able to see blacktip sharks in large numbers.

On the north-western side of Mauritius, Trou aux Biches is a reliable choice for scuba diving and boasts good access to a number of different dive spots. These include Caravelle, Corsaire Wall, Holt's Rock, Kingfish, Lobster Rock and Tombant de la Pointe aux Canonniers. For shipwrecks around Trou aux Biches, you can choose between the wrecks of the Emily, the Stella Maru and the Waterlily, all of which are suitable for scuba divers of all abilities. 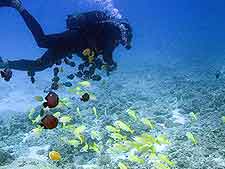 Located on the western shore of Mauritius, Flic en Flac stands out in particular when it comes to scuba diving, with favourable conditions and good visibility throughout the year. Top dive spots and attractive seascapes around Flic en Flac include those of Couline Bambou, La Cathedrale, Manioc and Rempart Serpent, while the best wreck dives are the Tug II tugboat and the Kei Sei 113 barge, which was sunk on purpose in 1988 to create an artificial coral reef and subsequent haven for marine life. 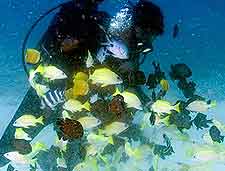 The south-eastern coast of Mauritius is called home by some particularly dramatic and impressive underwater landscapes, which comprise large caves and tunnels, as well as some rocky arches. Colorado is one of the best places for scuba diving in this part of Mauritius, with its wealth of lobsters and barracuda. Nearby Roches Zozo is another prime dive hotspot, as is the 19th-century Sirius shipwreck and Blue Bay, which is perfect for beginner divers.

Eastern Mauritius is known for its tidal currents, with the considerable water movement resulting in a very different kind of seascape and its own assortment of marine species. Divers around the Belmar Pass may well encounter grey and bull (Zambezi) sharks. Head southwards and you can drift-dive around the Passe de Trou d'Eau Douce.