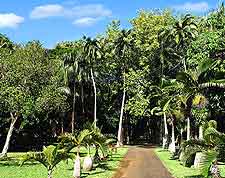 The island nation of Mauritius is known for its beautiful coastline and tropical landscape. Equally, though, visitors throng here to enjoy its many tourist attractions. Popular sightseeing destinations in Mauritius range from historic houses and forts to zoos and gardens.

Particularly notable attractions include the Eureka Mansion at Moka, the Aquarium at Pointe aux Piments, La Vanille Reserve des Mascareignes at Rivière des Anguilles, and the Royal Botanical Gardens of Pamplemousses at Port Louis, the proud capital city. However, many tourists simply head straight to the Mauritius beaches to relax and get their holiday suntan. 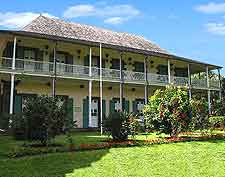 Address: Route Cotiere, Port Louis, Mauritius, MU
Tel: +230 263 6987
Created by French botanist and explorer Pierre Poivre in the mid-18th century, the Pamplemousses Botanical Garden is actually the landscaped garden that surrounds a mansion house known as 'Mon Plaisir'. Today, the garden has become one of the most popular tourist destinations in Mauritius. In 1988, it was renamed the Sir Seewoodsagur Ramgoolam Botanical Garden or SSR for short. The garden is home to an exotic collection of plants, including several palm tree species that are rarely found elsewhere, giant water lilies, spice plants and ebonies.
Open hours: daily - 09:00 to 18:00
Admission: charge 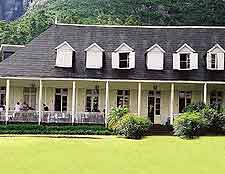 Address: Moka, Mauritius, MU, Africa
Tel: +230 433 8477
Just south of the Le Pouce mountain is this rather beautiful Creole house, which was built in the early part of the 19th-century and served as the colonial residence of aristocrats from France and England. Constructed mostly from wood and set amidst beautiful gardens, the Eureka Mansion is most closely associated with the Le Clézio family. It was sold in 1985 and today serves as a museum-type attraction, offering a taster of life during the plantation days. Artefacts are displayed as they would have been in colonial times, with antique furniture, old maps, photographs and porcelain helping to bring the house to life. The onsite restaurant provides a tasty meal with many Mauritian dishes, while there are also cottages / guest houses on the estate featuring popular accommodation. Worth looking out for is the tropical Eureka Waterfall.
Open hours: Monday to Saturday - 09:00 to 17:00, Sunday - 09:00 to 15:30
Admission: charge

Address: Coastal Road, Pointe aux Piments, Mauritius, MU, Africa
Tel: +230 261 4561
A visit to Mauritius wouldn't be complete without taking a look around its aquarium. Some 200 marine species, including lobsters, eels, Crown Squirrelfish, Devil Firefish and octopus specimens, live in five tanks. In the largest tank it is possible to get a bird's eye view of sharks, eels and giant sea turtles. If you're not a diving enthusiast, then a visit to the aquarium will make you feel like you have actually seen beneath the waters of the surrounding Indian Ocean for yourself. Fish feeding takes place at 11:00 every day and so this is always a popular time to visit. Children will enjoy getting hands-on with some friendly creatures at the touch pool.
Open hours: Monday to Saturday - 09:30 to 17:00, Sunday - 10:00 to 15:00
Admission: charge 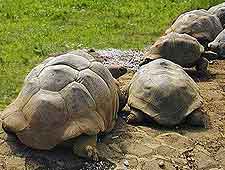 Address: Senneville, Rivière des Anguilles, Mauritius, MU, Africa
Tel: +230 626 2503
This picturesque park, located in the south of Mauritius, is famous as a breeding centre for giant tortoises. The park's oldest tortoise resident is Domino, thought to be over 90 years old. Boasting a population of around 1,000 tortoises, the park is also called home by approximately 2,000 Nile crocodiles. An insectarium houses an extensive collection of just under 25,000 species of butterflies, moths and beetles. As well as admiring the wildlife, there are plenty of opportunities to stroll around the park's beautiful tropical gardens. This family friendly attraction comes complete with its own adventure playground and small tortoise museum.
Open hours: daily - 09:30 to 18:00
Admission: charge 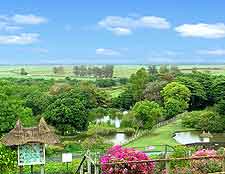 Address: Royal Road, Cascavelle, Mauritius, MU, Africa
Tel: +230 452 0694
Situated between Flic en Flac and Tamarin, the Casela Nature and Leisure Park has to rate as one of the island's top attractions and covers roughly 35 acres / 14 hectares. The park is home to 1,500 birds, along with tigers, lions, cheetahs, zebras, antelope and giant tortoises. As well as a chance to encounter the park's animal residents, there are many other activities on offer, including quad bike rides, walking trails, a petting zoo, a playground for children and a restaurant.
Open hours: daily, May to September - 09:00 to 17:00; October to April - 09:00 to 18:00; petting zoo - 09:00 to 16:00
Admission: charge 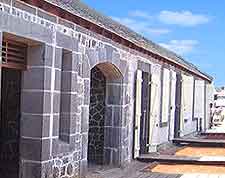 Address: Off Immigration Square, Port Louis, Mauritius, MU
This historic site comprises a depot built in 1849 to administer the arrival of indentured immigrants, brought in to replace the island's slaves following the abolition of slavery. Most of the immigrants came from India, although a small number also came from China, nearby Madagascar and East Africa. The Aapravasi Ghat played an important role in Mauritian history, with around 500,000 immigrants passing through its doors between 1849 and 1923, when this type of immigration was finally brought to an end. Whilst most of the buildings on the site were damaged in the 1980s as a result of nearby road construction, it was later declared a national monument and subsequently renovated.
Open hours: daily
Admission: free