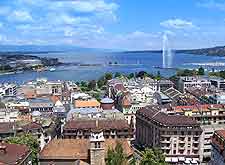 Often referred to as Genève in French, the Swiss city of Geneva is the country's third-biggest city and offers a definite international flavour. The city enjoys a superb location next to Lake Geneva, which is known locally in Switzerland as Lac Léman and is where you will find the breathtaking Jet d'Eau fountain, which is actually the tallest fountain on the planet and often sprays a gentle mist towards onlookers, although if the wind changes, be prepared to get soaked.

Geneva is the official home of the European Headquarters of the United Nations, along with more than 200 other important international organisations. Overflowing with museums, Geneva is a true city of culture and features an extensive calendar of events and an exciting nightlife, particularly around the banks of the River Rhône.

The Office du Tourisme (Tourism Office) is located along the Rue du Mont-Blanc, close to the Main Post Office, and is where you will find the 'Genève info-jeunes' booklet, along with a range of other handy tourist information. A further outlet known as the Information de la Ville de Genève is situated on the Pont de la Machine, while for Internet access, pay a visit to the railway station next to the Place de Montbrillant, or the Internet cafe on the Rue des Alpes. 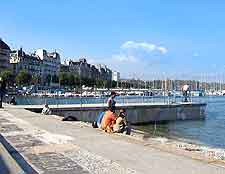 During the summer months, tourists will find themselves spending much of their time on the shores of Lake Geneva, particularly around the Cologny area, where an extremely popular beach is to be found. Alternatively, take a cruise along the River Rhône, head to the Quai de Mont Blanc onboard a miniature train, cool down at the enormous Aquaparc, or enjoy a musical performance in the elegant surroundings at the Bâtiment des Forces Motrices opera house. More information about Geneva Tourist Attractions. 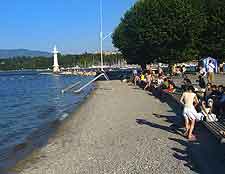 A number of ancient castles, historic palaces and beautiful buildings all reside within Geneva and give the city a distinctive character. Located along the Cours St. Pierre, the St. Pierre Cathedral dates back to the 11th century and if you are prepared for a climb, take in the superb views at the very top of the tall north tower. The Palace of Nations is another important landmark in Geneva and is where the United Nations regularly meet. Also look out for the Maison Tavel, which is the city's oldest house and was constructed during the 14th century. More information about Geneva Landmarks. 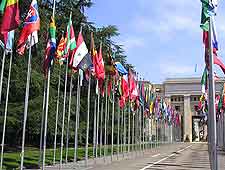 Many quality museums are located within Geneva and impart an array on information upon their visitors. The Musée Ariana contains a collection of more than 15,000 glass and ceramic pieces and is actually a particularly impressive Italian Renaissance-style building. Other popular museums include the Musée d'Histoire Naturelle, where the natural history exhibits regularly attract over 300,000 visitors each year, and the Musée d'Ethnographie, home to some 100,000 objects from all over the world. Art lovers in Geneva should not overlook the Musée d'Art Moderne et Contemporain (MAMCO) or indeed the Musée d'Art et d'Histoire, where masterpieces by Cézanne and Renoir can be viewed and quietly appreciated. More information about Geneva Museums and Geneva Art Galleries. 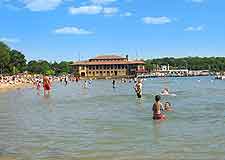 Well placed for brief excursions into the Swiss Alps and even the French Alps, Geneva in close to a wealth of top tourist attractions. Summer hiking trails and winter sports are plentiful around La Givrine, while the city of Lausanne is also close by, where boat trips regularly depart from its Ouchy harbour. Being so near to the French border, even the city of Lyon is within reach of Geneva and located to the south-west. If you are lucky enough to plan a day trip to Lyon, make sure that you properly explore its beautiful Renaissance quarter and take a ride on the funicular railway to the Roman amphitheatre on the Fourvière Hill. More information about Geneva Attractions Nearby.