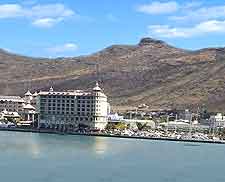 Measuring some 61 km / 38 miles in length and roughly 46 km / 29 miles wide, the main island of Mauritius is relatively small.

Its geography is a mix of mountain ranges, lowland plains, sandy beaches and tropical lagoons.

The capital city of Port Louis is situated on the coast. However, most of the other large towns in Mauritius tend to be found inland, towards the island's central region. 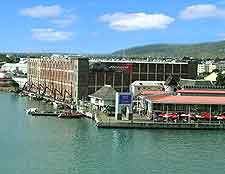 As the capital city of Mauritius and the country's financial hub, Port Louis is a popular tourist destination for those visiting the island. A stroll around the city is a great way to explore all that it has to offer, from historic colonial buildings, such as Fort Adelaide, to its bustling waterfront areas and central market. Port Louis' Chinatown area is also worth a visit. More information about Port Louis

Grand Baie is an extremely popular tourist destination, largely because of its clear blue waters and the plethora of sporting activities on offer. For visitors who prefer a more leisurely holiday, Grand Baie is well-stocked in terms of shops, restaurants and lively bars. Nearby Perrybere Beach, situated between Grand Baie and Cap Malheureux, is reputed to be one of the best beaches for swimming in Mauritius. Grand Baie is also an excellent base for deep-sea angling excursions and boat trips out to the islands off the coast. 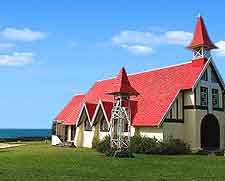 Cap Malheureux is a small fishing village situated at the northern tip of Mauritius. Its name is thought to derive from the many shipwrecks that took place off this part of the coast. It's also here that British troops landed in 1810. Places to visit at Cap Malheureux include the majestic Notre Dame Auxiliatrice, with its vivid red bell tower. From here, it's also possible to see the strangely shaped island of Coin de Mire on a clear day. The town also makes a good base for deep-sea fishing enthusiasts.

Situated about 18 km / 11 miles south of Port Louis, Curepipe is perhaps best known for being home to one of the country's top colleges. It's also the centre of Mauritius' model ship building industry. Curepipe's town centre boasts a number of interesting historic buildings, including a Town Hall, as well as some useful shops. For tourists, however, Curepipe's top attractions have to be the nearby Trou aux Cerfs volcanic crater and the Tamarind Falls.

Mahebourg used to be the capital of Mauritius, at a time when the island was under French control. Today, it's more of a peaceful village on the coast. However, it's still easy to see the town's colonial heritage from the architecture that remains. Whilst there's no beach in Mahebourg, there is a beautiful waterfront, which is popular in the evenings with tourists out to enjoy a stroll. Mahebourg's main attraction is its Naval Museum.

Moka is situated around 12 km / 7 miles from Port Louis. Renowned as the hub of academic life on the island, Moka is the home of the University of Mauritius and the Mahatma Gandhi Institute. For tourists, the town's most visited attractions include nearby Eureka House, a splendid colonial mansion dating all the way back to the 1830s.