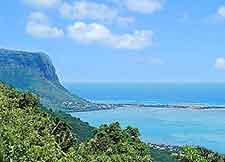 Every year, Mauritius attracts thousands of visitors, drawn by its stunning white sandy beaches, tropical landscape and striking landmarks, both natural and man-made. The historic site of Vieux Grand Port, Signal Mountain, Fort Adelaide and the Balaclava Ruins all stand out in particular.

All over Mauritius there are also dozens of landmarks and sights well worth a visit. These range from beautiful waterfalls and the coloured sandy earth of Chamarel, to ancient fortresses and colonial buildings that played an important role in the country's history. 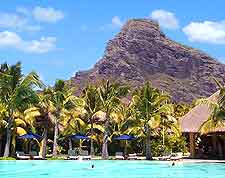 Address: Le Morne Peninsula, Mauritius, MU, Africa
Le Morne is more than just a rugged mountain peninsula that juts out from the south-western tip of Mauritius into the Indian Ocean. It is also a symbol of the fight for freedom made by slaves back in the 18th and 19th centuries. The remoteness and inaccessibility of the mountain made it a place where runaway slaves could hide in relative safety. In 2008, the mountain became a World Heritage Site. The peninsula itself gained its name from the rocky crag known as Le Morne Brabant, where some superb beaches and fine accommodation await.
Open hours: daily
Admission: free 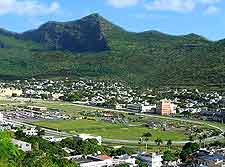 Address: Port Louis, Mauritius, MU, Africa
A trip to the top of Signal Mountain, one of the most conspicuous landmarks of Port Louis, is a great way to get your bearings when you first arrive in Mauritius. At 323 metres / 1,059 feet in height, it offers splendid panoramic views over the city of Port Louis and the surrounding area. It's possible to drive part of the way, leaving your car in the small paved parking area provided. The short walk to the summit from the car park is more than worth the effort.
Open hours: daily
Admission: free 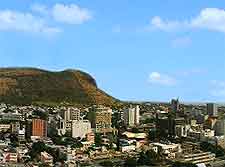 Address: Suffren Street, Port Louis, Mauritius, MU
Building work on Fort Adelaide took ten years to complete and started in 1830. Originally intended as a fortress to protect the British troops from attack by French settlers, by the time it was built, there was little call for its services as a fort. Consequently, it has only really been used as an occasional garrison for troops. Visitors who attempt the climb to the fort are amply rewarded with good views over the city and harbour. Of interest, the restored barracks now comprise a number of popular fashion boutiques.
Open hours: Monday to Saturday - 08:00 to 20:00
Admission: charge 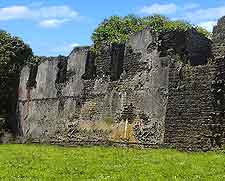 Address: Mahebourg, Mauritius, MU, Africa
Located in the south-eastern part of Mauritius, just north of Mahebourg, Vieux Grand Port marks the spot where Dutch sailors first landed on the island in 1638. A fort was built on the site, named after the Dutch ruler Frederik Hendrik, and the remains of this original building can still be seen. By the 18th century, Grand Port was in the hands of the French, who occupied the site until the 19th century, when it came under British administration. A reconstructed village has been built here to commemorate the battle which took place in 1810 between the British and the French, ending in French victory.
Open hours: daily
Admission: free

Address: Baie aux Tortues, Mauritius, MU, Africa
Amidst the white sandy beaches of the Baie aux Tortues lie the ruins of a French fort. Built by the island's first French Governor, Balaclava served as an arsenal. Remains that can be seen today include parts of the ancient sea wall, as well as an old flour mill and a lime kiln. Nearby, the Labourdonnais Orchards and their wealth of exotic fruit trees provide a further attraction, as do the neighbouring trails suitable for hiking and mountain biking.
Open hours: daily
Admission: free 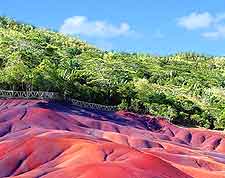 Address: Chamarel, Mauritius, MU, Africa
The multi-coloured rolling dunes of Chamarel are amongst the island's earliest tourist attractions. These dunes are situated within the Bel Ombre Sugar Estate and really are a remarkable geological phenomenon. The longer you look, the more colours you will see, from reds and browns to purples and yellows. It's thought that the dunes came into being as a result of volcanic activity. When mineral-rich molten rock cooled and then weathered, it left the layers of coloured sand / earth that you can see today. Whilst it's no longer possible to walk on the dunes, visitors can get a fairly good look at them from viewing platforms. The light is particularly good for taking photographs at sunset and sunrise.
Open hours: daily
Admission: charge 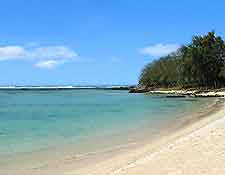 Address: Ile aux Cerfs, Mauritius, MU, Africa
The Ile aux Cerfs (Deer Island) is a true paradise boasting beautiful white sandy beaches and a tropical lagoon. Located off the eastern coast, the Ile aux Cerfs attracts day trippers who are keen to enjoy a spot of sunbathing or simply wish to sit and admire the wonderful views. Water sports enthusiasts are also well catered for, with facilities on hand for water skiing and snorkelling. Those wishing to head over to the Ile aux Cerfs will find that scheduled boats sail across from the village of Trou d'Eau Douce.
Open hours: daily
Admission: free 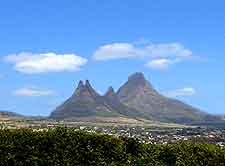 Address: Curepipe, Mauritius, MU, Africa
The Trou aux Cerfs has to be the main draw card for those visiting the town of Curepipe. Thousands come each year to admire this dormant volcanic crater, which stands at just over 600 metres / 1,970 feet in height and is more than 300 metres / 984 feet in width. Whilst the lake at the bottom of the crater is obscured by trees, a trip around the crater's edge rewards visitors with great views over the surrounding countryside, although access is via a steep embankment and can be difficult.
Open hours: daily
Admission: free 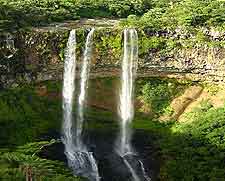 Address: Curepipe, Mauritius, MU, Africa
The Tamarind Falls have quite rightly earned their place as one of the island's more popular sights. Comprising a series of seven waterfalls in all, the cascade finishes in a deep water pool that has been naturally dug out of the rock. Even though it's only a fairly short walk to get to the falls, it does take a little effort in the heat of the tropical sun. However, visitors can cool off with a cooling swim when they arrive at this destination.
Open hours: daily
Admission: free