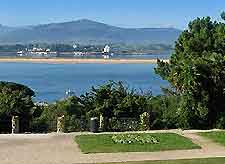 The Spanish port city of Santander is located within the Cantabria province and on the northern coastline of Spain, next to the Basque Country. Almost 200,000 people now live in Santander and this number greatly swells during the summer months, when tourists arrive to soak up the sunshine on the city's Sardinero Beach (Playa del Sardinero).

The city itself stands on the northerly side of the Bay of Santander (Bahia de Santander) and on the Peninsula de la Magdalena. Transport connections in the city are excellent and both the bus and railway station are just a matter of metres away from each other, and also very close to the busy ferry terminal.

If you take a short stroll to the north-east of central Santander, it won't be long until you reach the older part of the city, which is clearly steeped in history. From here, the main beaches are approximately a 30-minute walk away.

The Municipal Tourist Office in Santander is a good source of city maps and stands within the Jardines de Pereda, while a further outlet opens during the busy summer season and is situated across from the Plaza Italia.