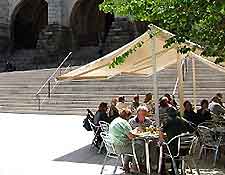 Cantabrian cuisine is likely to be a highlight of any holiday in Santander, and many atmospheric restaurants and eateries can be found within the city's old wine cellars, which are known to the locals as the 'bodegas'. Dining out in Santander is always an enjoyable pastime, and the waterfront promenades are brimming with pavement cafes and bars. 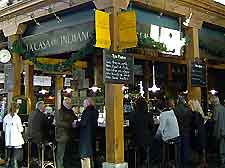 Seafood is always extremely popular at restaurants in Santander, and some of the most traditional eateries are located within the colourful Fishing Quarter (Barrio Pesquero) and around the Small Port (Puerto Chico). Here, dining venues serve fish caught from around the coastline and the fishing wharf, such as bass, hake, mackerel, sardines and sole, as well as crabs and lobsters. Fresh fish, including both salmon and trout, are also often featured on the menus, often originating from the rivers around Cantabria.

Also popular at Santander's restaurants is 'highlander stew' (cocido montanés), fish stew (marmita), and various pastries and cakes, such as 'quesada' and 'sobaos'. Meals are often accompanied by regional Spainish wines, such as Rioja, originating from Cantabria's many vineyards. Look out for the innumerable ice creamery outlets dotted around the city centre, offering an array of sumptuous flavours, perfect for a sunny day.