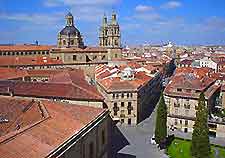 Known for its style, grace and famous university, Salamanca is a stunning city, lying on the eastern side of Spain, close to Portugal. Salamanca is full of striking sandstone buildings, historic Renaissance-style architecture and spacious public squares, including the Plaza Mayor, which lies in the very heart of Salamanca and has become an integral part of city life.

The Plaza Mayor dates back to the early 18th century and is surrounded by many breathtaking and palatial buildings, including the Salamanca Ayuntamiento (City Hall). Salamanca also features a wealth of fine dining, with restaurants throughout the city, together with a good selection of lively Tapas bars, being particularly concentrated around Salamanca's Van Dyck area and the Plaza del Mercado.

Central Salamanca is fairly compact are many areas can be easily reached on foot, with the Tormes River being situated slightly to the south of Salamanca city centre. Tourism has become an increasingly important part of Salamanca's economy and the city's main tourism bureaus include the Municipal Tourist Information Office on the Plaza Mayor and Salamanca Tourist Information Office at the Casa de las Conchas on Rua Mayor. Both tourist information centres offer an array of travel advice about the best places to stay, eat and visit, including information about the city's Barrio Pizarrales district, Barrio Garrido district, downtown area and Salamanca's lively university district, which is based around the main university campus. 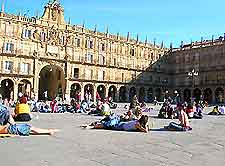 Many of the most sought-after hotels in Salamanca can be found in the very heart of the city, close to the Plaza Mayor, where accommodation can be surprisingly inexpensive when booked in advance. Popular hotels can be also found alongside the Tormes River, around the Gran Via - close to shops, restaurants and Tapas bars, and around the campus of the Universidad de Salamanca - known for its nightlife. For those staying in Salamanca on a budget, a central youth hostel and camping grounds are the best options, together with numerous reasonably priced bed and breakfasts. More information about Salamanca Hotels.

Salamanca's main tourist attractions include the Castille and Leon Conference Centre - hosting many notable concerts and festivals throughout Salamanca's calendar; Palacio de La Salina - a magnificent 16th-century palace close to the Plaza Mayor, with stone carvings and intricate mouldings; Palacio de Solis - the 16th-century Solis Palace, located in the heart of Salamanca, with many well-preserved original features; and the Plaza de Toros La Glorieta - the Salamanca Bullring, with a capacity of around 10,000 and home to many regular events. 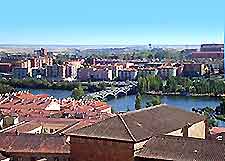 Some of Salamanca's main museums and art galleries include San Esteban Museum - situated inside the extremely historic Convento de San Esteban, with many religious treasures; Castille and Leon Film Library - featuring a host of movie memorabilia and information about the film industry; Art Nouveau and Art Déco Museum - containing an extensive collection of contemporary art works and modernist works; International Centre of Art - one of Salamanca's top art galleries, with many changing exhibitions and works by Picasso; Museum of Fine Arts - with many exceptional paintings and religious pieces, known locally as the Museo Provincial de Bellas Artes; and the Museum of the City's History - dedicated to the history and heritage of the Salamanca area, with many local gems. More information about Salamanca Museums and Salamanca Art Galleries.

Tourist attractions located nearby Salamanca include the capital of Spain, Madrid - which can be reached in around two and a half hours and is overflowing with must-see attractions and historical sights; Avila - a small and appealing city, famous for its ancient city walls; Toledo - a stunning city around three hours from Salamanca, with many important medieval-style buildings and partly surrounded by the Tagus River; Alba de Tormes - just a short trip from Salamanca, home to the Santa Isabel Convent and a popular beach area; Alberca - an appealing village listed as a 'National Heritage Site' nearby Salamanca, with views of the neighbouring Sierra de Francia mountains; Arribes del Duero - a picturesque spot within driving distance of Salamanca, featuring scenic views and natural waterfalls; the town of Béjar - home to a number of popular tourist attractions, including the historic town walls and Mateo Hernández Museum; Ciudad Rodrigo - with many historic structures, including a magnificent cathedral and old castle; and Guijuelo - a popular town, with summer festivals, carnivals and many excellent restaurants. More information about Salamanca Attractions Nearby.