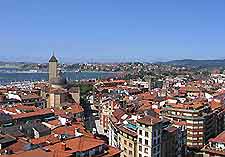 The city of Bilbao is situated on the northern side of Spain, close to the coastline and nearby beaches, being the largest and most lively city in the Basque Country. Bilbao is a particularly historic city, with a legacy of old buildings and a rich culture, based around Old Town Bilbao, in the Casco Viejo area.

However, Bilbao is constantly reinventing itself, with many spectacular projects and impressive contemporary architecture, such as the breathtaking Guggenheim Museum, making this one of Spain's most exciting cities. Often known locally simply as 'Botxo', Bilbao also boasts an impressive selection of restaurants and shops, together with a vibrant nightlife to rival any city. With a scenic backdrop of green hills from the Vizcaya area, Bilbao has long been a major tourist destination and is dissected by the Nervión River, much of which is lined by a host of sightseeing opportunities.

Tourism is encouraged throughout Bilbao, with the Bilbao Tourist Office being located along the Paseo del Arenal, with a further tourist information kiosk being sited next to the Guggenheim Museum. Both offer a range of leaflets and brochures about the area's main tourist attractions, together with information about Bilbao's public transport network, which includes a stylish Metro subway system. Bilbao is divided into eight main districts, which are broadly grouped into two regions, the Old Quarter (Casco Viejo) and New Town (Ensanche). Old Town Bilbao is known for its historic buildings, narrow alleyways, Tapas bars and street entertainment, while New Town Bilbao stands close to the central Nervión River and is home to the main train stations. 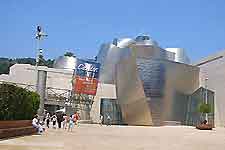 There are a good selection of hotels throughout the city of Bilbao, with many of the city's most popular accommodation options being based in the heart of the city and close to the main attractions, including the Guggenheim. Further hotels can be found in the Casco Viejo area, including cheap hostels and guest houses, and along the banks of the Nervion Estuary, next to the campus of the city's Universidad de Deusto, and centered around the Plaza Circular. Close to central Bilbao, a number of hotels are located along the coastline, on the city's outskirts, nearby Bilbao Airport (BIO), and in the areas of Deusto and Getxo. More information about Bilbao Hotels.

Bilbao's main tourist attractions include the Biblioteca Municipal de Bidebarrieta - Bilbao's Municipal Library, a historical building with a large collection of books, temporary exhibitions and Internet access; Estadio de Fútbol de San Mamés - a popular football stadium in the suburbs of Bilbao, with a capacity of around 40,000 spectators; Mercado Antiguo Lavadero - Bilbao's 'Old Market', which takes place in a historic laundry house, with a good selection of speciality shops nearby; the Palacio de Congresos y de la Música - a notable Music and Conference Centre, hosting regular concerts, ballets, operas and other performances; and Plaza Circular - a prominent part of Bilbao, surrounded by a mixture of buildings, including the city's highest skyscraper. 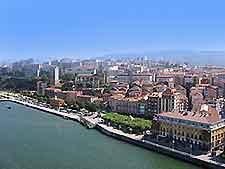 Major landmarks in Bilbao include Plaza Nueva - part of the Old Quarter, with 18th-century stone arches and al fresco terrace dining; Bilbao's Plaza de Toros de Vista Alegre - a vast bullring which dates back to early 1960s, with many popular fiestas in spring and summer; the Teatro Arriaga - an important theatre, built in the late 19th century, known for its imposing façade; the Universidad de Deusto - situated in the Abandoibarra district of Bilbao, featuring a number of ancient buildings, chapels and landscaped gardens; and the Ayuntamiento de Bilbao - the grand city hall, with Baroque-style architecture and regular guided tours.

Further popular tourist attractions in Bilbao include the Palacio de Chávarri - a beautiful palace with a mixture of architectural styles, home to the Vizcayan Civil Government; the Puente Colgante - an unusual iron bridge with a moving platform, now an important heritage site; the Puente de San Antón - one of the most noteworthy and historic bridges in Bilbao, which has become associated with the city's image; and the Santa y Real Casa de la Misericordia - a magnificent building known for its Neo-classical architecture and landscaped gardens. Bilbao also offers a good selection of parks, including the Parque de Dona Casilda, Parque de Europa, Paseo del Arena, and the Jardines de Albia - the Albia Gardens, containing beautifully landscaped areas and an ancient church. More information about Bilbao Tourist Attractions and Bilbao Landmarks.

Some of Bilbao's main museums and art galleries include the Museo Taurino - the Bilbao Bullfighting Museum, which specialises in the city's bullfighting history, with guided tours and a host of memorabilia; Museo Vasco de Historia de la Medicina y de las Ciencias - otherwise known as the Bilbao Medicine and Sciences Museum, with information about the history and advances of medicine; Ria de Bilbao Maritime Museum - located in the docks of the Euskalduna shipyard, full of nautical artefacts, educational maritime information and a number of breathtaking sailing ships; Museo Guggenheim - an eye-catching titanium-clad art gallery which has become one of Bilbao's star attractions; Museo de Bellas Artes (Museum of Fine Arts) - specialising in modern works, including an exhibition of Gothic paintings and a small cinema; and Bilbao's Museo de Reproducciones Artisticas - full of authentic plaster reconstructions of many world-famous sculptures and statues. More information about Bilbao Museums and Bilbao Art Galleries.

Tourist attractions located nearby Bilbao include San Sebastian - also often known as 'Donostia', to the east Bilbao and near to the French border, with a bustling port area, popular theme park and funicular railway; Santander - to the west of Bilbao, known for its rich Roman heritage, 13th-century cathedral, sandy beaches and magnificent central bay; Gatika - a charming town close to Bilbao, home to the Gorliz y Plencia beaches and a 500-year-old medieval castle; Gernika - a popular town, overflowing with tourist attractions, including the council building of Casa de Juntas de Gernika, and the Santimamine Caves; Durango - a small town known for its famous palace, the Etxezarreta Palace, which houses many important local artefacts and paintings; the town of Balmaseda - just a short trip from Bilbao, featuring an ancient bridge built in the 12th century; and the Puerto Deportivo El Abra Getxo - a lively marina area located in Bilbao's suburbs, with an array of waterfront restaurants and shops. More information about Bilbao Attractions Nearby.