Santander Events, Things to Do and Festivals 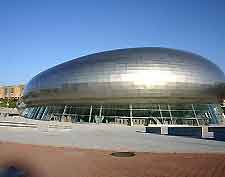 The summer season in Santander is a very exciting time to pay a visit to this city, with many of its biggest events and most popular things to do taking place in July and August each year. The Fundación Marcelino Botin on Calle de Pedrueca hosts numerous well-supported events and seasonal festivals in Santander, while others are staged in public plazas and city parks, such as the Parque de Cabo Mayor and the Parque de la Magdalena, and on the beaches of El Sardinero.

The Semana Grande is amongst the biggest festivals held in Santander and takes place each year at the end of July. Soon after, August sees many celebrations, including both the Summer Festival and also the Festival Internacional de Santander, both of which offer live music events and concerts throughout the entire month, attracting large crowds and big names in the music industry.

Throughout the summer season in Santander, the Palacio de la Magdalena plays host to many popular events and exhibitions, while the very established Sauga Folk Music Festival is another leading event at this time of the year and was first held in 1994.

The main festivals held in Santander are as follows: