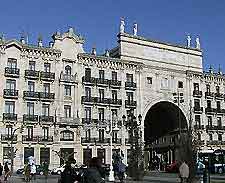 A number of stylish shopping districts are spread around Santander allowing tourists to easily find whatever is needed. Souvenir shoppers holidaying in Santander regularly favour the city's countless antiques stores and art galleries, while for the very best in Spanish ceramics, you will need to head next door to the neighbouring historic town of Santillana del Mar.

Santander is different to most Spanish cities, in that its shopping scene is not only concentrated within the city centre, but within the suburbs and near to the outlying airport. Particularly popular and on the city's outskirts is the El Corte Ingles, a giant department store located on the Calle de Jerónimo Sainz de la Maza and resembling something of a shopping mall, which comes complete with a supermarket, cinema and a huge selection of themed seaside souvenirs. 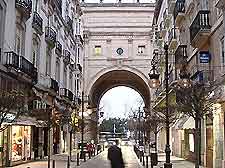 In the very centre of Santander, the Alameda de Oviedo boulevard stretches from the Cuatro Caminos Roundabout to the easterly Plaza de Numancia, being lined with shops and passing the Ayuntamiento, the Calle de San Fernando and also the Calle Vargas. If you are shopping in this area, you will likely encounter a number of street vendors, who will try and sell you everything from flowers and jewellery, to handbags, shoes and other fashion accessories.

The Calle Burgos is another rather prominent shopping district in Santander city centre and has been completely pedestrianised. Now a major thoroughfare in the city, the Calle Burgos features some very characterful street lamps and is home to the beautiful Teatro Gran Cinema, which dates back almost 100 years.