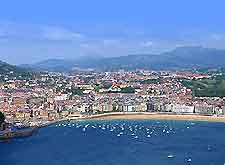 One of the highlights of Spain's Basque country, San Sebastian is also known as 'Donostia' and stands on the northern coastline, close to the French border. San Sebastian is centred around the beautiful La Concha Bay and is a sophisticated area, with San Sebastian featuring a scenic backdrop of hills from the nearby Guipúzcoa area.

With appealing and spacious avenues, San Sebastian offers a certain elegance and grace, which is unusual for a seaside resort. San Sebastian features four main beaches, all of which are suitable for a range of water sports, including surfing.

Both old and new abound throughout San Sebastian, with a host of restaurants specialising in local Basque cuisine, together with many lively Tapas bars, particularly around the Old Quarter district (Parte Vieja). Other notable regions of San Sebastian include the coastal Gros district, Zona Romántica and the downtown area - a particularly lively part of San Sebastian, home to a grand cathedral and a number of excellent shopping streets. Tourism is actively encouraged all over San Sebastian, with the city's main tourist information bureau being the Centro de Attractión y Turismo along the Boulevard Reina Regente. Here you will find a good selection of tourism advice, colourful leaflets and information about the best places to eat, stay and visit. 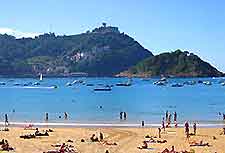 Hotels are in good supply in San Sebastian, quickly becoming fully booked during the city's Easter festivities and summer season. Both hotels in the city centre and along the coastline are popular, with many visitors choose accommodation overlooking La Concha beach. Further hotels can be found in and around San Sebastian's Old Quarter - where inexpensive guest houses are plentiful, alongside the river, on the city's outskirts, and in neighbouring towns. More information about San Sebastian Hotels. 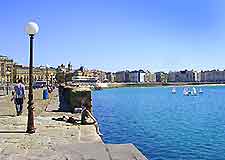 Some of San Sebastian's main museums and art galleries include the Itsas Marine Museum - featuring educational information and displays about marine life, including recreations of whole ecosystems; Museo Naval - the Naval Museum, containing many large collections and historic information about the San Sebastian Port; Galeria Altxerri - with exhibitions of paintings and sculptures by many notable local artists; Koldo Mitxelena Arts Centre - an eye-catching building, complete with conference hall and an art exhibition, hosting many of San Sebastian's top events; and Museo San Telmo - the San Telmo Museum, home to a large number of impressive paintings with Spanish origins. More information about San Sebastian Museums and San Sebastian Art Galleries.

Tourist attractions located nearby San Sebastian include Bilbao - an important city situated to the west of San Sebastian, with a population of more than 350,000 and many world-class tourist attractions, together with historical landmarks and spacious plazas; Santander - located in Spain's Canabria area, to the west of San Sebastian, known for its impressive Roman heritage and bustling port; Zaragoza - a truly cosmopolitan city which can be reached in around two and a half hours, with a population exceeding 600,000, making it the fifth-largest city in Spain; Getaria - a busy port town close to San Sebastian, with a rich medieval heritage; the town of Hondarribia - best known for its magnificent town hall (auntamiento), which dates back to the 18th century; Pasaia - a coastal village, with origins in the 12th-century and many water-based leisure activities; and the Medieval village of Zarautz - a popular excursion from San Sebastian, featuring a beachfront and a range of water sports. More information about San Sebastian Attractions Nearby.