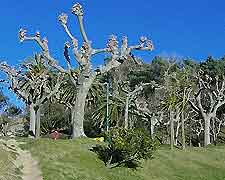 A very green city with lush parklands contrasting greatly with its sandy beaches, Santander is filled with public gardens and city parks. Standing close to the stunning beaches of Santander's ever-popular El Sardinero area, the Parque de Cabo Mayor is filled with attractions, and is located next to the rock formation referred to as the 'Devil's Bridge' (Puente del Diablo).

Close by, the Jardines de Piquio (Piquio Gardens) also boasts some wonderful vantage points, while the seaside Parque de La Magdalena is also rather notable in Santander, being home to a small zoo and well suited to coastal walks.

Address: Via N-611 Road from Santander, Santander, Spain, ES
Tel: +34 0942 20 8299
The Dunas de Liencres Natural Park covers just under 500 acres / 200 hectares and is bordered by a series of connected beaches. Both an important nature reserve and recreational space, this park is filled with native Spanish flora and fauna.

Address: Paseo de la Pereda, Santander, Spain, ES
Perhaps the most famous of all the city's landscaped gardens, the Jardines de Pereda enjoys a central location, where it covers some 6 acres / 2.5 hectares. The Jardines de Pereda is home to a number of important attractions, such as the music pavilion and the monument to the local 19th-century Spanish novelist, José Maria de Pereda, as well as being filled with seasonal flowers and several fountains.

Address: Avenida de Castaneda, Santander, Spain, ES
A true highlight of the exceptionally tourist friendly El Sardinero district, the Piquio Gardens are the perfect place to come and relax beneath a tamarind tree, or to enjoy some stunning views across the Ensenada del Sardinero and the Cabo Menor. The Magdalena Peninsula is also clearly visible and lies to the south.

Address: Avenida del Faro, Santander, Spain, ES
Just a stone's throw from the popular El Sardinero beaches, the Parque de Cabo Mayor is one not to miss and stands alongside the seafront and atop the cliffs, where it encompasses just under 25 acres / 10 hectares. Tourists often come here to check out the panoramas from the top of the park's Cabo Mayor lighthouse, which is known locally as the Faro de Cabo Mayor.

Address: Avenida de La Magdalena, Santander, Spain, ES
Tel: +34 0942 27 2504
Surrounding the city's magnificent Royal Palace (Palacio Real), the Parque de La Magdalena has become a much-visited public space within the El Sardinero area and is always a bit hit with families, who enjoy exploring the zoological gardens. Attractions at the zoo including everything from lions and exotic birds, to penguins and even a group of performing seals.

Address: Avenida del Faro, Santander, Spain, ES
Somewhat surrounded by tall cliff faces and situated between the beaches of both El Sardinero and Matalenas, the Parque de Matalenas is amongst the city's very biggest and spreads for approximately 60 acres / 25 hectares in total. Woodland trails, meadowland, a large lake, native deer, a small zoo and an affordable golf course complete the main attractions here.

Address: Avenida del Stadium, Santander, Spain, ES
Sited on the far easterly side of Santander, the Parque del Doctor González Mesones is conveniently just a short stroll from the beachfront of El Sardinero and so is ideal if you are looking for somewhere to relax after a day on the beach. Established planting provides a mature appearance, with tall palm trees and exotic foliage add a noticeable tropical feeling.

Address: Avenida de Cajo, Santander, Spain, ES
Encompassing a little over 30 acres / 13 hectares, the Parque del Doctor Morales is perhaps best known for its much-loved statue of a cow, which is located within the very centre of the park. Standing within the Cazona neighbourhood, the Parque del Doctor Morales offers a tranquil setting and much respite, and is where you will find the Nuestra Senora de Montes Claros church.