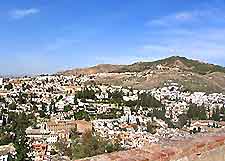 Without doubt one of Spain's true jewels, this city lies on the southern side of Spain, in the Granada Province. Famous around the world for its stunning Alhambra fortress, which overlooks much of Granada, being perched high on a hill, the city is also home to a host of other sightseeing opportunities and a rich Moorish heritage.

Many of the most historic tourist attractions are located in the Old Quarter (Parte Vieja) and the Albayzin district, both of which are known for their al fresco dining and endless array of shops. For those looking to see the main tourist attractions, the Bono Turistico city pass is worth purchasing and offers huge savings for a number of the principle monuments, remaining valid for a week. 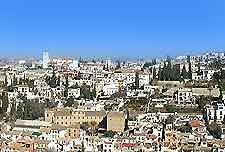 Tourism is becoming an important part of the city's economy and visitors are always welcomed, with many of the most popular hotels being located in the heart of the city, close to the Cathedral and Royal Chapel, and overlooking the scenic River Genil. Further hotels can be found nearby the main Conference Centre, close to the neighbouring airport, and around Granada University - a historic campus home to around 60,000 students. More information about Granada Hotels.

The chief tourist attractions include La Alhambra - a famous 13th-century Moorish fortress, surrounded by the Generalife Gardens, where many outdoor summer concerts are held; Palacio de Congresos y Exposiciones - the modern Granada Conference Centre, with a capacity of around 2,000 people; and Granada's nightlife - consisting of many lively nightspots, al fresco dining, Tapas bars, fiestas and Flamenco dancing around El Sacromonte. 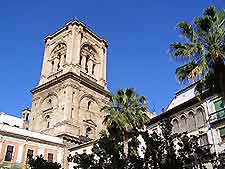 Additional tourist attractions and popular landmarks include El Banuelo - the Historic Baths, with Moorish origins, dating back approximately 1,000 years; Murallas del Albayzin - remains of the walls which once surrounded an 8th-century fortress; the Palacio del Mexuar - an ancient palace with an elaborate interior, where a wealthy sultan lived; and the Mirador de San Nicolas - offering some of the best views of the Alhambra, Sierra Nevada mountains and beyond. More information about Granada Tourist Attractions and Granada Landmarks.

Some of the foremost museums and art galleries include the Museo Arqueológico y Etnológico - the Archaeological Museum, home to many local treasures, artefacts and information about the area's Roman past; Museo de la Zambra - set within the 'Caves of the Gypsies', celebrating the area's many gypsy festivals and atmospheric Flamenco dancing; Parque de las Ciencias - a modern science museum and park, full of interactive displays, together with a planetarium and plenty of educational information; and the Museo de Bellas Artes - the Granada Museum of Fine Arts, housing a large collection of paintings, sculptures and plasters from the 1500s onwards. More information about Granada Museums and Granada Art Galleries.

Tourist attractions located nearby include many cities, towns and villages, such as Alhama, Almeria, Baza, Guadix, Illura, Loja, Montefrio, and Sevilla (Seville) - known for its outstanding architecture, enormous cathedral, museums and annual fiestas. Also, the Sierra Nevada mountains are close to the city and offer breathtaking views and many recreational activities, which even include year-round skiing. Also within reach of Granada are the coastal resorts of Malaga, Marbella and Torremolinos, all of which stand to the southwest of the city, along Spain's legendary Costa del Sol. More information about Granada Attractions Nearby.