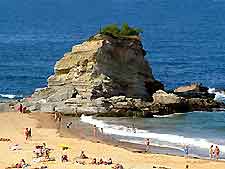 The beaches of Santander have long been the city's number one draw card and each summer attract many thousands of sun seekers, who come here to sunbathe, swim and simply relax. Some of the most popular of Santander's beaches are highly suitable for families and also lend themselves to an array of water sports, with surfing and windsurfing being possible at the Playa de Valdearenas and the Playa de la Magdalena, respectively.

No less than five of the beaches in the Santander area have been awarded the European Union Blue Flag for extreme cleanliness and extensive facilities, and the Playa Primera de El Sardinero remains one of the firm favourites. Another rather endearing sandy stretch is the Playa de Bikinis, which actually earned its name during the 1950s, when university students from the city's very own Menendez Pelayo International University first dared to wear their fashionable bikinis on this actual spot.


The main beaches are explained in detail below.