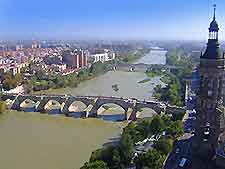 An interesting and graceful city, Zaragoza stands in the northeastern quarter of Spain and is the capital city of the Aragon area. Zaragoza is the fifth-biggest city in the whole of Spain and Zaragoza's wealth and prosperity is reflected in the city's spacious boulevards, extensive shopping districts, lively bars and fine dining.

Centred around the scenic River Ebro, Zaragoza is known for its Roman heritage, being home to the Murallas Romanas, ancient remains of Roman walls, which once surrounded the central area of Zaragoza. Throughout the year, Zaragoza hosts many significant festivals, which appeal to both tourists and locals. Events worth noting include Zaragoza's Fiestas del Pilar during the second week each October, featuring a breathtaking mountain of flowers in the central Plaza del Pilar square.

Tourism both in and around Zaragoza is actively encouraged, with the many tourist information centres being the Officina de Turismo de Aragon along the Avenida de César Augusto, Plaza de Pilar Tourist Information Office on the Plaza de Pilar, and the Torreón Tourist Information Office on Gloriata de Pio XII. Here you will find a range of information about Zaragoza's many tourist attractions, together with general tourism advice and travel tips, including how the city is structured. Zaragoza is divided into several notable districts, each with their own distinct character and appeal. The main districts in Zaragoza include Old Town (Casco Histórico) - which contains many historical landmarks, cathedrals and restaurants; downtown Zaragoza - otherwise known as the Zona Centro, being centred around the wide Gran Via avenue; and the University Delicias district - a lively part of the city, based around the famous Universidad de Zaragoza. 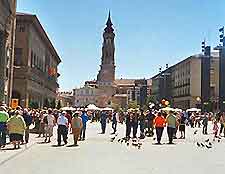 Zaragoza is known for its considerable assortment of hotels, with accommodation to suit all budgets. The city's most popular hotels are based around the heart of Zaragoza, in the Zona Centro, where you will find a high concentration of hotels close to shopping streets, restaurants, Tapas bars and nightclubs. Many of Zaragoza's most exclusive hotels are centred around both the Plaza de Espana and the Gran Via, near to the River Huerva. For those staying in Zaragoza on a budget, a range of inexpensive guest houses and bed and breakfasts can be found around the historic district, close to the Plaza del Pilar, and in the city's leafy outskirts. More information about Zaragoza Hotels.

Zaragoza's main tourist attractions include the University of Zaragoza - the Campus Universitario, which covers an enormous part of the city, with many different faculties and grand historic buildings; the Ayuntamiento - Zaragoza City Hall, one of the city's most noteworthy buildings, known for its balcony lined with Spanish flags; Imperial Aragon Canal - used as a central part of extensive farmland irrigation, with walking trails and stunning countryside views; River Ebro - a river of great beauty and historical significance, meandering through the heart of Zaragoza, crossed by five main bridges; Parque de Atracciones - a major amusement park in the Zaragoza area, particularly suitable for families, with roller coasters, water slides and swimming pools; and Primo Rivera Park - a vast parkland with large botanical gardens containing many exotic plant specimens. 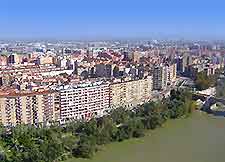 Some of Zaragoza's main museums and art galleries include Caesaraugusta Roman Baths Museum - featuring ancient remains of Roman baths, which were used almost 2,000 years ago; Forum of Caesaraugusta Museum - providing a real insight into Zaragoza's rich past, with important remains and many archaeological finds and artefacts on display; Paleontology Museum - part of the University of Zaragoza campus, home to large and important collection of rocks and fossils; Roman Port Museum - containing many historical remains and information about the once bustling Roman River Ebro harbour; Zaragoza's Camón Aznar Museum - home to a large collection of art works spanning the last 500 years; Diocesan Museum - with many religious paintings, Renaissance-style pieces and old portraits; and the Zaragoza Museum - a particularly historic art museum in the heart of the city, with a mixture of old paintings, archaeological treasures and artefacts. More information about Zaragoza Museums and Zaragoza Art Galleries.

Tourist attractions located nearby Zaragoza include Bilbao - an impressive city in the country's famous Basque Country located to the northwest of Zaragoza, with spacious public squares, a historic Old Quarter area, and an appealing coastal setting; San Sebastian - also known as 'Donostia', located to the north of Zaragoza, close to the French border with many lively nightspots based around the port area (El Puerto); Barcelona - a cosmopolitan city which can be reached in less than three hours, located on Spain's eastern coast; Calatayud - a major city within easy driving distance from Zaragoza, with historic castle remains and Roman ruins; Carinena - an area consisting of a number of villages, known for their vineyards and wineries; the town of Caspe - always a popular excursion from Zaragoza, with a 14th-century church and scenic reservoir; Daroca - an old town with Roman remains and a 16th-century church; the town of Illueca - close to Zaragoza, with a strong Medieval past, including a 14th-century castle overlooking much of the area; and Tarazona - a nearby town close to Zaragoza, with an ancient cathedral and famous summer 'Battle of the Tomatoes' festival. More information about Zaragoza Attractions Nearby.