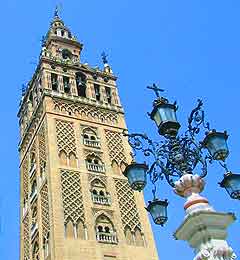 Seville (Sevilla) is one of Spain's major cities and is also the capital of the Andalusia region. With an enormous amount to offer both the tourist and business traveller, Seville is a friendly and captivating place to visit. The busy city centre is well pedestrianised and many of the best attractions are within easy walking distance.

Straddling the Guadalquivir River, central Seville comprises an abundance of twisting streets and narrow lanes, adding much character to the city. Most public squares feel rather small and intimate, although the Plaza Nueva is quite a size and stands next to the Plaza de San Francisco, while the Avenida de la Constitucion is a prominent and very straight thoroughfare and home to the city's main tourist information centre. Further regional tourism offices in Seville are to be found on the Plaza del Triunfo, at the Santa Justa train station and also at the San Pablo Airport.

The city of Seville may be the fourth-largest in Spain, but it is a place where you can see open countryside from the city centre, and even pick the legendary Seville oranges from trees. Seville city centre is an interesting maze of old, winding streets and there are also a couple of large avenues, which divide the city into separate areas. With a subtropical climate and an average on more than 300 days sunshine, the coastline nearby has many wonderful beaches and has become a very popular place to relax, particularly in and around the Costa del Sol.

The large River Guadalquivir lies on the western side of the city centre and this beautiful expanse of water provides the perfect place for a romantic stroll, and there are also scenic boat trips that start from the Torre del Oro. Across the River Guadalquivir are various churches, monuments and neighbourhoods, all waiting to be discovered. This area features more than its fair share of Seville apartments, hostales and pensiones. 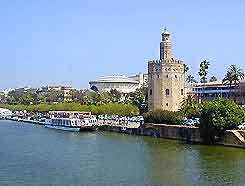 Seville has a large number of tourist attractions and some of the most visited include the Parque Maria Luisa - a vast parkland in the centre, the Plaza de Espana - a semicircular plaza that formed the centrepiece at the city's famous 1929 Exposition, Seville Cathedral, the Giralda tower, the Alcázar fortress-palace and countless further major monuments. There are many important museums in Seville, providing interesting information about this city, such as the Museo de Bellas Artes - one of the finest museums in Andalusia, with a truly splendid ceiling. Those planning to indulge themselves in a spot of Spanish art appreciation should head to the Hospital de los Venerables, which boasts a large collection of paintings, in the Santa Cruz area of this city. More information about Seville Tourist Attractions.

The main regions of Seville include El Arenal, situated on the western side of the city, which was once home to the port. El Arenal is home to a large bullring - the majestic Plaza de Toros de la Maestranzas, the Moorish Torre del Oro - a 13th-century tower built to protect the port of Seville, the Teatro de la Maestranza - a modern theatre and opera house, and many excellent restaurants. The region of Santa Cruz is located on the eastern side of the city centre. Santa Cruz is probably the most picturesque part of Seville and the busy Calle de las Sierpres is amongst the city's principal shopping streets. The cathedral and the bell tower 'La Giralda' are situated in the Santa Cruz area. La Giralda is open to the public and the top of the tall tower provides spectacular panoramic views of Seville's spreading cityscape. The region of La Macarena is to the north and presents an interesting mix of Baroque and Mudejar churches, traditional Tapas bars and the Calle de la Feria - a small, lively shopping street full of small shops.

Throughout the year, Seville holds many exciting and atmospheric festivals and events, and these celebrations are particularly enjoyable for tourists. The city is a real jewel of Europe and there is always something to see and enjoy in and around the lively Spanish city of Seville.