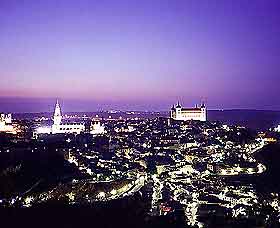 Declared as a national monument, Toledo, a small city found on a Castilian hilltop overlooking the Rio Tajo (River Tagus), was once the Spanish capital under the Visigoths (567 to 711) and again when Felipe II moved the Court of Spain to Madrid (1085 to 1561). It is still the religious centre of Spain. Locals often refer to Toledo as 'La Ciudad Imperial' (The Imperial City).

The tourist information office in Toledo is located on the Carretera de Madrid, next to the main gate officially known as the Puerta Nueva de Bisagra. An additional tourism kiosk resides on the Plaza del Ayuntamiento, close to the cathedral.

The top attractions in Toledo do of course include the city's magnificent cathedral, which houses some beautiful stained glass, delicate wood and stone sculptures and a large collection of paintings. Also of note is El Alcázar (the Alcázar), a fort that was founded almost 1,000 years ago, while for Spanish art, the Museo de Santa Cruz (Holy Cross Museum) boasts an extensive collection, including a wide selection of paintings by famous Renaissance artist, El Greco. Relatively close by is the Museo de Taller del Moro (the Taller del Moro Museum), where you can learn more about the construction of Toledo's cathedral itself. 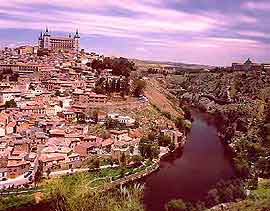 Toledo is situated near to Madrid, the capital of Spain, and is full of many charming narrow, winding streets which are almost like a labyrinth. Most of the Toledo hotels are located at the Plaza de Zocodover, which is known as Zoco to the locals, and there are also a good number of excellent restaurants and bars in this area.

The diverse architectural styles that traverse the centuries from Gothic to Baroque have benefited from the city's ties to the Christians, Moors and Jews. Boasting a plethora of fine arts and including works by the likes of El Greco, Goya and Velaquez, Toledo is one of Europe's most visited sites and very accessible on foot.