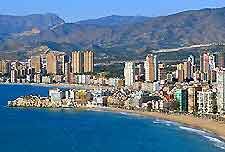 Possibly the ultimate holiday destination, Benidorm stands on the eastern coast of Spain, along the scenic Costa Blanca. This thriving resort is famed for its seafront hotels, lively nightlife, endless restaurants, and superb shopping opportunities, with Benidorm being home to around 200 nightclubs and discos, more than 1,000 bars, and a host of English-style pubs.

Around five million people visit Benidorm each year for its spectacular coastline and breathtaking white and golden sandy beaches, which stretch for more than 6 km / 4 miles. The most popular beaches include the Playa del Levante and the Playa del Poniente, which meet beneath the beautiful Plaza del Castillo.

Tourism has long been a major part of Benidorm's way of life, with endless sightseeing opportunities around the area. The main tourism bureau in the resort is the Benidorm Tourist Information Office along the Avenida Martinez Alejos. There are also a number of tourism kiosks in Benidorm, along both the Avenida de Europa and in the Rincón de Loix area. Here you will find a selection of travel guides, leaflets, and information about the resort's main tourist attractions and districts, which include Old Town - which is also known as the Old Quarter (Parte Vieja), downtown - based around the city centre, and the coastal districts of both Levante and Poniente. 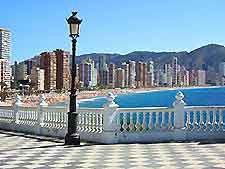 Benidorm has never been more popular, with thousands of visitors arriving throughout the year, especially during the hot summer season and mild winter months. As you would expect, tourists wishing to stay in this part of the Costa Blanca are well catered for, with an enormous selection of high-rise beachfront hotels and apartments available, particularly around Levante Beach, many of which offer private swimming pools and a number of restaurants. Further hotels can be found in Old Town, throughout the city centre, and in the Poniente area, which is a noticeably quieter part of Benidorm. More information about Benidorm Hotels.

Benidorm's main tourist attractions include a huge range of water sports - such as water skiing, scuba diving and snorkelling, windsurfing, banana boats and also paragliding; Terra Mitica - a major family theme park close to central Benidorm, with a number of roller coasters and other fast rides; Aqualandia Water Amusement Park - with water slides, waterfalls and large swimming pools with nearby refreshment areas; boat trips to the village of Calpe - a great way to view the town's coast from a distance, departing from the main marina area; and the resort's legendary nightlife - with a range of top nightclubs, discos and restaurants available around the resort's centre, including Benidorm Palace, close to Levante Beach. More information about Benidorm Tourist Attractions. 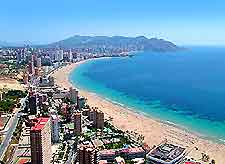 Safari parks and gardens are widespread both in and around Benidorm, with many tourists choosing to visit Mundomar Marine Exotic Animal Park - a superb tourist attraction for all ages, with parrots, dolphins, penguins and a host of educational information; Aitana Safari Park - close by, with animal favourites, such as lions, tigers, elephants and giraffes, together with a children's zoo area and information about conservation; Vergel Safari Park - just a short drive from the centre of Benidorm, with a range of animals including seals and dolphins, together with miniature train rides; and Cactuslandia - a spectacular and colourful landscaped garden containing over 1,000 different species of both succulents and cacti. More information about Benidorm Safari Parks and Gardens.

Although not known for its museums and art galleries, Benidorm does offer a number of notable museums worth visiting, often containing interesting information about the area's past. The main museums and art galleries in the Benidorm area include the House Museum - with numerous paintings, sculptures and temporary exhibitions of art works; the Agricultural Museum (Museo de Agricola) - complete with working water wheel and mill; and the Wax Museum (Museo de Cera) - full of lifelike waxworks of celebrities and well-known public figures. More information about Benidorm Museums and Art Galleries.

Tourist attractions located nearby Benidorm include a number of cities, towns and villages, such as Alicante - to the south, known for its beaches, seafront promenade and historic St. Barbara Castle; Valencia - a major Spanish city, famous for its enormous university complex and spectacular space-age City of Arts and Science; the Balearic Islands - including Ibiza, which can be easily reached from Benidorm by regular ferry trips; Altea - an appealing coastal town just a few miles to the north, full of whitewashed houses; Albir - a small and popular resort sandwiched between Altea and Benidorm, with a beachfront promenade; Finestrat - a coastal village featuring particularly mountainous scenery and a quiet beach area; Guadalest - just a short drive away, famous for its 16th-century castle and carved mountain tunnel; and Villajoyosa - a harbour town to the south, with a sandy beach, fishing and many brightly coloured houses. More information about Benidorm Attractions Nearby.