Central Park is famous the world over for being the giant green space in the heart of New York city, with many of the most desirable hotels offering rooms overlooking this vast expanse of trees, ponds and pathways. Local families often spend much time relaxing in Central Park, while those on holiday may like to pay a visit to the small onsite zoo, which dates all the way back to 1864. If you are here at Christmas, then there are two ice skating rinks to choose between, one of which functions as a swimming pool during the summer months (the Lasker Pool and Rink).

Located within the Bronx, the glorious New York Botanical Garden comes with a profusion of exotic fauna and seasonal flowers, being founded in 1891 and now attracting more than 800,000 visitors each year. At the very center, visitors will discover remnants of the actual forest that once covered all of the city, before European settlers arrived in the 17th century. Established slightly later, in 1910, is the equally impressive Brooklyn Botanic Garden, where Japanese landscaping and more than 200 cherry trees provide much seasonal interest. 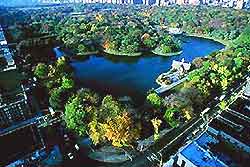 Address: 59th to 110th Streets, New York City, NY, 10023, USA
Tel: +1 212 310 6600
Central Park is located in the Manhattan district and covers an enormous area of almost 850 acres / 345 hectares. This rectangular park was once marshland and it took around 16 years to transform the wasteland into the beautiful Central Park of today, which involved shifting some five million cubic tons of soil. The park finally opened in 1873 when everything had been completely re-landscaped, with very few of the original plants and trees remaining. During the construction work, over four million new trees and shrubs were planted as part of the enormous task of landscaping this vast, rectangular site.

Highlights of Central Park include the Wildlife Conservation Zoo, a historic carousel ride, numerous playgrounds, winter ice skating rinks, fountains, statues, monuments and Strawberry Fields, where John Lennon is remembered. The Central Park roadway loops around the park for 6 miles / 9.5 km and is closed in the evenings and during the weekends, when it becomes a popular track for runners, skaters and cyclists.
Open hours: daily - 06:00 to 01:00

Address: 200th Street, Bronx, New York City, NY, 10458, USA
Tel: +1 718 817 8700
The 250-acre / 101-hectare Botanical Garden is full of many interesting features, such as the Enid A. Haupt Conservatory, a grand Victorian iron and glass structure housing many tropical plants. There are also numerous large trees, woodland walks, ponds, colorful flowers and a picnic area, as well as an onsite museum building and a gift shop. The Botanical Garden can be easily reached by taking the subway train to Bedford Park and then walking down the hill.
Open hours: April to October, Tuesday to Sunday - 10:00 to 18:00, November to March, Tuesday to Sunday 10:00 to 17:00 (also open on public holidays)
Admission: charge, discounts available for children and seniors

Address: Liberty State Park, Jersey City, New Jersey, 07305, USA
Tel: +1 201 915 3400
Liberty State Park is situated in New Jersey, close to New York, and features some stunning views of the city's impressive skyline. The landscaped gardens are popular with locals and there are pathways with many seating areas dotted around in strategic places. In the summer, the park becomes a popular venue for open-air concerts and can be easily reached by ferry from the harbor at the World Financial Center, within the Manhattan district.

Address: 1000 Washington Avenue, Brooklyn, New York City, NY, 11225, USA
Tel: +1 718 623 7200
The Brooklyn Botanic Garden enjoys just under one million annual visitors and covers an area of approximately 52 acres / 21 hectares. Situated close to the Prospect Heights neighborhood and on the southern side of the city, the garden is home to many important horticultural collections, some of which are housed within climate-controlled pavilions. These collections include roses, cacti, insectivorous plants, orchids, aquatic plants and some very old bonsai trees, displayed within the C.V. Starr Bonsai Museum. The neighboring Prospect Park Zoo may also be of interest.
Open hours: Tuesday to Friday - 08:00 to 16:30, Saturday and Sunday - 10:00 to 16:30
Admission: charge, discounts available for children and seniors, children 12 years old and under are free

Address: West 4th Street, New York City, NY, 10003, USA
Tel: +1 212 431 1080
Washington Square Park is a small busy spot and has long been a well-used public space. Originally a cemetery protected from city development, the park has many interesting features, including a magnificent old tree near the northwestern corner known as the 'Hangman's Elm', which was reputedly used for executions many years ago. Visitors will also discover street performers, seating areas, a fountain and the stunning triumphal arch - originally built in wood to celebrate the centennial of George Washington's inauguration in 1889. Interestingly, the arch proved so popular that is was replaced with a stone version just six years later.
Open hours: daily - 24 hours

Address: 240th Street, Bronx, New York City, NY, 10462, USA
Tel: +1 718 601 1460
Van Cortlandt Park is situated on the outskirts of the Bronx District, where it remains the third-largest park in the city, covering over 1,100 acres / 445 hectares. Highlights include playgrounds for children, fields, picnic areas, a small lake, flower borders and nature trails. There are also sporting facilities, such as a swimming pool, horseback riding and a golf course.
Open hours: daily - 06:00 to sunset