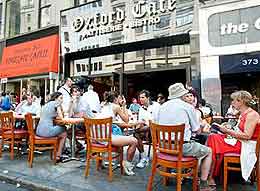 There are around 15,000 restaurants in New York, serving almost every type of cuisine possible. Dining out at New York restaurants is popular for both the local New Yorkers and for visitors to the city. Many of the people that work in the city do not have time to cook dinner due to long working hours and there are so many tempting eateries everywhere in the city, serving every kind of food imaginable, that it is hard to resist.

Fresh produce is abundant is New York and many of the restaurants have top chefs from all over the world, preparing their local cuisine in the city. With so many excellent restaurants, cafés and eateries in the city, full of enticing food smells, eating out is one of the pleasures of being in New York city. 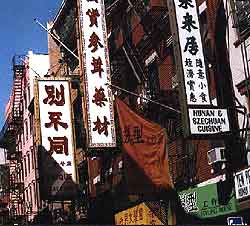 In the morning, many people in New York simply line up at the popular street vendors for a simple snack breakfast, on their way to work. These tasty items include fresh bagels, doughnuts, hot dogs, pretzels, pizza slices, honey-roasted nuts, and in the summer, many ice cream bars. Street food in New York is cheap and often very tasty. There are also numerous fast food outlets throughout the city, serving a range of good, cheap food.

For quick snacks, many of the New York delis also sell ready-cooked hot meals and are a useful place to get a precooked meal, sandwiches or a simple salad. Diners are a little more expensive, but have excellent facilities. They usually have an enormous menu and serve food throughout to day, ranging from filling breakfasts to traditional American cuisine and there are often lunchtime specials. City diners are full of character and the portions are normally very large.

Although many New York hotels have restaurants that serve breakfast, it is normally cheaper and much more interesting to venture out to a nearby coffee shop or diner for the first meal of the day. Most diners serve fantastic breakfasts until around 11:00, and these include sausages, bacon, toast, waffles, fried potatoes, pancakes and eggs cooked in a variety of ways, such as 'sunny side up' (fried without turning over), 'over easy' (fried and turned over briefly) and scrambled.

Eateries in the Manhattan district serve fresh sandwiches, made with a variety of different breads, such as white, whole wheat, rye or French and New York restaurants will create virtually any combination of sandwich fillings that your appetite demands.

Brunch in New York can provide an excellent early, light-lunch and is something of an institution in New York restaurants, particularly at the weekends. Typical brunch may consist of pancakes with maple syrup, cream cheese on bagels, omelettes and French toast.

Bars in New York are often a very inexpensive place to dine in the city and the meals are usually very tasty. In some city bars, a buffet is laid out during a late-afternoon happy hour to entice customers. Typical bar food includes burgers, fries, potato skins, sandwiches, pizzas, salads and many bars in New York serve some seriously excellent cuisine. Staying open until late into the night, the kitchens often close by midnight.

Restaurants in New York usually start serving dinner from early evening until late at night. The choice of cuisine is virtually endless and with restaurants located throughout the city, you won't have to travel far for dinner. Most serve large portions and dinner can be quite filling.

Salads are often eaten with meals in New York as an appetizer and these usually come with a variety of different dressings. Main dishes in traditional American restaurants include burgers, steaks, fish, seafood, French fries, baked potatoes and a choice of vegetables.

The many, tasty ethnic types of cuisine served at New York restaurants include: