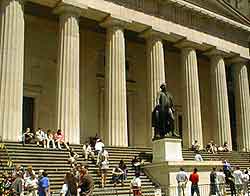 New York's Financial District leads the world's money markets and has an enormous influence on global economies. Wall Street is filled with many of New York's largest corporations, banks, businesses and some enormous skyscrapers.

At the heart of the business district are some of the city's most important financial buildings. These include Federal Hall, which was built between 1834 to 1842 and is home to an exhibition relating to the United States Constitution, the Federal Reserve Bank of New York, which houses a large share of the world's gold reserves belonging to more than 60 countries (over USD 100 billion) and also the New York Stock Exchange, which opened in 1903 and is where people trade hundreds of millions of shares daily, both electronically and using the floor system. Parts of these buildings are open to the public and give a real insight into the history of the city's Financial District. 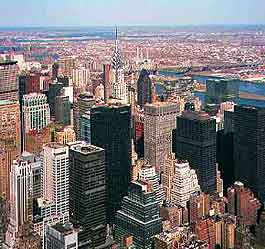 Business hours in the New York bay area are usually from Monday to Friday, between 09:00 to 17:00, although some city offices may close slightly later. Many shops are open longer and often throughout the weekends, and some supermarkets are open 24 hours. Banks in the city generally open from 08:00 to 16:00 and on one day of the week until late in the evening. On Saturdays, banks in New York are often open until midday.

Working lunches are a popular way to do business in New York and Americans are quick to use first-name terms. Some exclusive restaurants have a strict dress code, although a more informal, yet presentable dress code is acceptable. Drinks or dinner is a popular way to end the hard working week.

Many restaurants now have a strict 'no smoking' policy, although some tend to cater for smokers in different areas. Most offices are now nonsmoking and as this is currently a sensitive subjective in America, it is best to only smoke when in the company of like-minded people.