Getting Around, New York Travel, Transport and Car Rental

New York has an excellent public transport system and the city center is divided into an organized crisscross grid work of streets, avenues and blocks. If you have a map, finding your way around central New York is very straightforward and many of the city's major sights and attractions are within easy walking distance of each other.

Driving to and from New York is often very scenic and the journey is usually easy, with many main roads and expressways nearby. However, car travel in the city is quite different. Manhattan drivers are fearless and only the most confident drivers should use a car in central New York. Driving outside of rush hours and in particular in the evening is less stressful, when the roads are quieter. There are numerous large parking garages in and around the city, although these can be expensive when parking for long periods. If you want to travel outside and explore the surrounding area, hiring a car is an excellent method of transport and highly recommended. 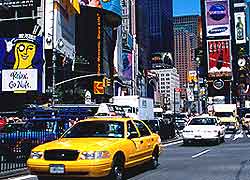 Taxis are fairly plentiful throughout New York and this is particular so during the city's busy rush hours. The city's famous yellow cabs can be easily hailed - just look out for the lighted sign on the top that indicates if the taxi is available for hire. Extra travel charges may be included for luggage or late-night traveling, so it can prove useful to ask the taxi driver about these before leaving. New York taxi drivers are notorious for knowing very little about the city's geography and many do not speak English very well, so be prepared for an interesting journey.

Buses in New York travel to almost every part of the city and beyond. City buses are clean, safe, inexpensive and often slow. For faster bus travel in New York, use the 'Limited Stop' buses. Bus stops are usually situated on or near street corners and are marked by a sign and a yellow painted kerb. Any length of bus journey in the city costs the same as the subway and you can pay with a travel token, a Metrocard or use the correct change, which you deposit next to the bus driver as you board the bus. There are over 200 bus routes in the city and almost 4,000 blue and white buses. Maps of local bus routes are available at most subways.

The New York train network is far from comprehensive and in many cases, services between major cities are not particularly frequent and domestic air travel can provide a possible alternative. However, city trains are fairly plush and always have plenty of leg room. For longer travel, some trains may include sleeping berths . All train departures from New York are from the Grand Central Terminal Station, which is a major city landmark at 42nd Street and Park Avenue, and from the Pennsylvania Station, known simply as Penn Station and located at 31st Street and Eighth Avenue.