JFK Airport currently handles the most international traffic anywhere in the USA and also serves as the number one freight gateway, being operated by the Port Authority of New York and New Jersey. Each week, in the region of 900,000 passengers arrive or depart from its eight terminals and 150+ gateways, with the main airlines including both American Airlines and Delta Air Lines. 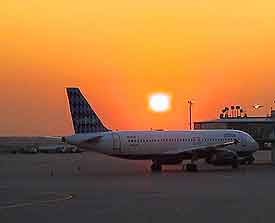 JKF Airport is New York's most well-known and is just 24 km / 15 miles southeast of the central Manhattan district. This busy air hub is quite simply enormous and seems to be continually expanding and improving its services.

JFK Airport has good connections to the main road network and is located on the Van Wyck Expressway (I-678), which can be reached via the Belt Parkway (NY-27). Driving into New York is fairly easy, with clear signage, although actually driving into downtown Manhattan is quite an experience and it is advisable to avoid rush hours if at all possible. Those driving into Manhattan will find that the journey takes roughly 40 minutes and includes the I-495 West Interstate, a partial toll road.

Operated by the Metropolitan Transportation Authority (MTA), regular buses depart for Grand Central Station and the Port Authority Bus Terminal every 30 minutes from 06:00 to midnight, whilst also connecting the Penn Railway Station until 18:00. There is a free airport shuttle bus operating day and night, running to the Howard Beach Station, which links to the underground subway system.

Taxis are readily available at JFK Airport and provide a convenient and easy way to travel to your chosen destination, although cabs can be fairly expensive. Popular destinations include the Bronx, Citi Field, Main Street and 60th Avenue, Queens, Riverdale, Victory Boulevard and the borough of Staten Island. It is worth noting that official yellow taxi cabs should be used at all times to ensure safety and also to avoid being overcharged.

The AirTrain JFK provides excellent connections to the city's train network. With links to the subways of MTA New York City Transit, and Long Island Rail Road (LIRR) at the Jamaica Station, trains can provide a useful alternative. Notable rail destinations include the subways of Brooklyn, Queens and Penn Station (Manhattan). The AirTrain service also connects the airline terminals, car parks and car rental companies, with these stops being completely free of charge.

Private limousines are an increasingly popular way to travel into the city and limos for all destinations are readily available for hire, together with private cars and shared-ride vans - where the cost of the journey is equally shared between all of the passengers.

The main limo and van companies include Airlink New York, All County Express, Dial 7, Prime Time Shuttles, Super Shuttle Long Island / Manhattan, Trans-Bridge and Westchester Express. Special courtesy telephones for limo companies are situated on the baggage reclaim levels, while private cars and shared-ride vans can be arranged at the Ground Transportation Information Counters and Welcome Centers, situated within each of the Arrivals areas.